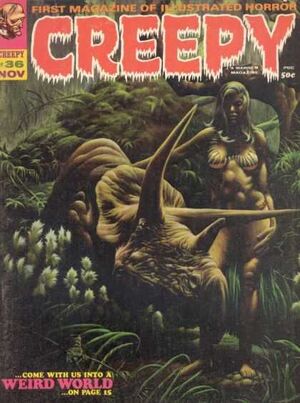 Appearing in "One Way to Break the Boredom"Edit

Synopsis for "One Way to Break the Boredom"Edit

1 of 7
Add photo
A rich man is bored with his life, and when the devil arrives he gives him his soul in order to become a vampire, a life that he plans to be very exciting. It is exciting for a while, he travels from place to place, kills many people, and always survives the execution whenever he is captured. Eventually however he arrives at an old city in the country with an old custom for executions, shooting with wooden arrows, something which kills him for real.

An astronaut arrives at a bizarre planet where he meets a beautiful woman, but also a talking frog and her father, a bizarre looking alien creature. He soon finds out that the planet is a mental asylum for crazy aliens. He heads into his ship to take off from the planet, but once he goes inside he becomes insane for real.

Appearing in "Frankenstein is a Clown"Edit

Synopsis for "Frankenstein is a Clown"Edit

A famous clown later in his career becomes well known as an actor playing a friendly monster on TV. Unfortunately for him he perishes in a car crash. A mad scientist brings him back as a real Frankenstein monster. He heads to a memorial for himself, but realizing how dangerous he is, he decides instead to kill himself for good by jumping out of a window.

Appearing in "On the Wings of a Bird"Edit

Synopsis for "On the Wings of a Bird"Edit

A man, Ahzid, is trapped in a desert prison with a talking statue. He dreams of the day that he'll be able to escape due to a bird that sits there, but never takes off. He has a dream of actually leaving on the bird, but when he wakes up he finds that the bird has already left and that he's trapped here due to sleeping in.

This story tells of four astronauts heading to a world with a natural resource, 'thurium' that will make them rich. One of the astronauts kills the three others, but when he arrives at the planet he finds it is nothing more than a waste dump and his ship falls into quicksand, trapping him there.

Appearing in "If a Body Meet a Body"Edit

Synopsis for "If a Body Meet a Body"Edit

A man is in a car crash with his friend. He awakens and heads home only to find his wife crying over his death. His friend arrives and tells him that they're both dead and they should head to the spirit world. At the urging of his friend the man jumps off a cliff. It ends up all being a trick however as the friend and wife are together, and he falls to his death. Only it ends up that the friend truly is dead, something he and the wife soon discover.

A hideous queen, Maleva, summons Darman, a sorcerer, offering him gold in exchange for making her look like her beautiful niece. They head to a cave in the icy mountain where he casts a spell such that Maleva will have her niece's exact appearance. Her niece is left frozen there in the cave so she'll always look the same. Instead of paying the sorcerer however, Maleva has him stabbed and left in the cave. Maleva doesn't get to enjoy her beauty for that long, as Darman, still left alive due to the cold starts eating the corpse of Maleva's niece, resulting in her body being torn to shreds.

Retrieved from "https://heykidscomics.fandom.com/wiki/Creepy_Vol_1_36?oldid=106673"
Community content is available under CC-BY-SA unless otherwise noted.