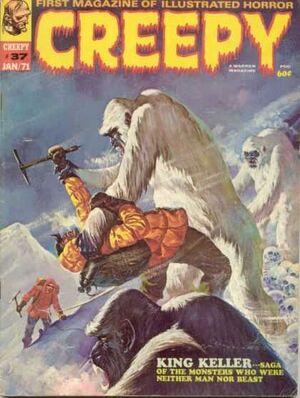 1 of 7
Add photo
A trio of students work with a professor to bring a dead man back to life with electricity. The dead man reveals himself as a murder victim, and they decide to have the professor kill him. But the dead man ends up killing the professor instead and takes his place at the school.

The story features a rocket that crashes into a city of yetis, which causes a sound to emanate from it, causing the yetis to kidnap human sacrifices. A man, Keller, is able to stop it, but they refuse to let him leave, fearing it'll come back if he goes.

A time traveling story about a man who hates his father, kills him, goes back in time and kills him back then, only to end up finding out that he is his own father, which is why his father treated him so bad throughout his life, knowing that he would kill him some day.

The story features a man treated like a machine called 10061 who saves a factory's machine by stopping a 'deviant'. But it is only a matter of time before 10061 starts to think for himself due to a note he receives, and he too is considered 'deviant' and is killed.

This story is about some sort of con where a guy convinces a man to have himself buried alive to avoid being captured by the police.

The story is about a man who has a party in a castle and tells the guests about the evil baron who used to live there, who was horrifically burned and brought in many women who he blinded so they couldn't see his face. The Baron arrives in the present and takes the eyes of the host.

Appearing in "The Cut-Throat Cat Blues"Edit

Synopsis for "The Cut-Throat Cat Blues"Edit

The story is about an artist who commits murder then later finds himself killed by cartoon characters.

Retrieved from "https://heykidscomics.fandom.com/wiki/Creepy_Vol_1_37?oldid=106674"
Community content is available under CC-BY-SA unless otherwise noted.