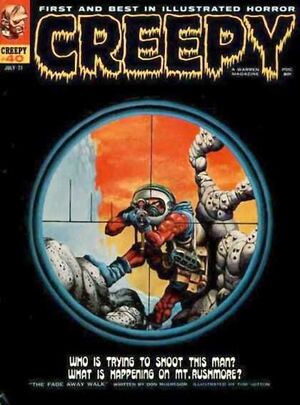 Appearing in "The Fade-Away Walk"Edit

Synopsis for "The Fade-Away Walk"Edit

Taking place after a nuclear holocaust, the story features two mutated men fighting around Mt. Rushmore. One of the men falls to his death after what else, but one of McGregor's typical pseudo-political ramblings between the two.

A secret agent who poses as other people tries to get out of the line of work since the real person always shows up. His boss convinces him to go on another mission because the guy he's impersonating is dead, so what happens? The guy comes back from the dead to reveal the truth yet again! They are both put into a trap they must escape from and the dead guy vanishes, trapping the agent in there for good.

This story features a swamp monster that can appear as anything to someone who sees it. The natives sacrifice maidens to it, so one warrior heads in to rescue his girl when it ends up being her. He thinks he kills the swamp demon and rescues her, but it ends up that the swamp demon survived and took her place.

Appearing in "Lost and Found"Edit

Synopsis for "Lost and Found"Edit

A wizard loses his ability to walk through solid things, which is transferred to a man in the present. The man tries to steal from a bank vault with the power but the wizard gets it back just as he's going through the vault.

The story features a man who tries to defeat a dragon to impress a girl. A blind old man living in a cave gives him a necklace which enables him to find the dragon, but it results in him killing the girl instead! Afterwards, with the necklace on his neck he looks for her but can't find her, even though her decapitated head is right in front of him.