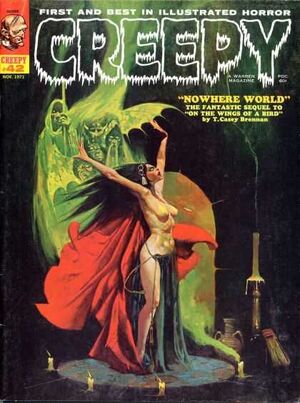 Appearing in "The Quaking Horror"Edit

Synopsis for "The Quaking Horror"Edit

1 of 7
Add photo
This HP Lovecraft-esque story features a house that has a dark horror underneath it, a bizarre tentacled monster that was summoned hundreds of years ago. The entire house eventually collapses, destroying the demon for good.

Appearing in "A Change of Identity!"Edit

Synopsis for "A Change of Identity!"Edit

A hunchbacked man attempts to get revenge on the townsfolk that haven't treated him well by rescuing a killed werewolf, who becomes a vampire. The vampire promises to turn the hunchback into a werewolf so he can get revenge, but decides instead to kill him and turn him into a zombie guard.

Appearing in "The Amazing Money-Making Wallet"Edit

Synopsis for "The Amazing Money-Making Wallet"Edit

This story is about a wallet that generates money on its own, but if you ever get rid of it, you'll dissolve. A thief steals the wallet, causing his victim to dissolve, and eventually he dissolves as well when he gets rid of the wallet.

This story is about a shapeshifting alien that crashes to our planet. In order to repair his ship he needs a metallic substance called Argentium. Taking the appearance of a wolf, he is accused of being a werewolf and is shot with a silver bullet, which ends up being the Argentium he needed to repair his ship and leave.

This story tells of a man who pays little attention to his life, focusing instead on a research project that ends up being meaningless when someone else completes it. He then gets fired from his job and tries to rob a bank but is killed trying to escape.

Appearing in "Escape from Nowhere World"Edit

Synopsis for "Escape from Nowhere World"Edit

A woman, Janeen suddenly appears in the mysterious nowhere world where Ahzid and the statue are. She and Ahzid try to escape, dragging the statue with them. The statue collapses, and using its sword Janeen and Ahzid tear their way out of the world and escape, while the broken statue lies there alone.

A tribe of wolf hunters in a winter landscape completely run out of wolves to hunt, so they head through the mountains, still to no avail. One of the men on the night of the full moon gains special powers. Tribe members start dying, obviously due to him. Eventually a wolf finally does appear, and kills him.

Retrieved from "https://heykidscomics.fandom.com/wiki/Creepy_Vol_1_42?oldid=106679"
Community content is available under CC-BY-SA unless otherwise noted.