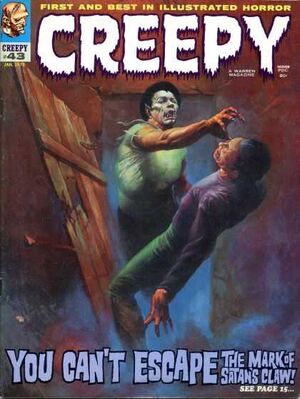 1 of 5
Add photo
This story features two businessmen who are enemies of each other. A doctor who was fired by one of them goes to the other, with a way to get revenge on the rival by becoming him through a brain transplant. The operations is successful, although the rival convinces the doctor to help him as well. By the end of the story all three have switched bodies with each other, and all three end up dying.

Appearing in "The Mark of Satan's Claw"Edit

Synopsis for "The Mark of Satan's Claw"Edit

A man comes to a small town, curious of some murders of children that are occurring. Law enforcement is unwilling to help him, but a man there admits to him that the town is full of Satan worshipers and that he left them when they started sacrificing children. Satan himself kills the man, but our protagonist is led to his girlfriend, who also left the Satan worshipers. Our protagonist is revealed to be Satan himself, and kills her too for betraying him.

Appearing in "The Men who Called Him Monster"Edit

Synopsis for "The Men who Called Him Monster"Edit

Synopsis for "Quest of the Bigfoot"Edit

This story features a pair of scientists investigating Bigfoot. They eventually come across an Eden occupied by the Bigfoots. One of the scientists morphs into Bigfoot and attacks the other scientist. But that scientist reveals that he is the abominable snowman and kills him, wanting to take over the Bigfoot's realm for his species.

A man and a young boy wander the desert after a plane crash. They eventually come across a group of women that end up eating him. At the end of the story it is revealed that the whole experience was a mirage, caused by the boy because he was upset at the man for hitting him.

Retrieved from "https://heykidscomics.fandom.com/wiki/Creepy_Vol_1_43?oldid=106680"
Community content is available under CC-BY-SA unless otherwise noted.