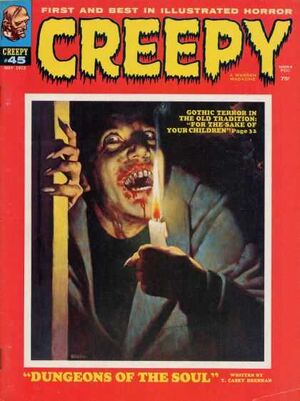 Appearing in "What Rough Beast"Edit

Synopsis for "What Rough Beast"Edit

A woman tells her husband about many months before, when she traveled through an alley, encountered a strange old man, then a large hairy beast. She passed out, then woke up hours later, finding the old man dead. She become pregnant soon after, and the baby is a horned beast. Suddenly, the beast she encountered bursts into the house and takes the baby, then leaves.

A medieval themed story, surrounding Targos, a warrior, who is in love with a goddess named Kirke, and goes to recover an amulet for her. After battling various beasts he recovers it, then takes from his enemy an amulet that gives him eternal life.

Appearing in "And Horror Crawls from Out of the Sea!"Edit

Synopsis for "And Horror Crawls from Out of the Sea!"Edit

A blob like creature from the sea takes the form of a dog, then, finding a group of four humans near the water, slowly starts taking them over as well. The last one alive kills the creature in a fire, but is soon seized by many others from the sea.

Appearing in "For the Sake of your Children!"Edit

Synopsis for "For the Sake of your Children!"Edit

A group of peasants dislike a nearby Baron, who is revealed to have vampires as ancestors. A mob gathers and goes to the Baron's castle after one of the children is found dead. Inside they kill the Baron, putting a stake through his heart. However a group of female vampires within the castle attack the mob, and when they return to the village, all of them are now vampires themselves.

Appearing in "Dungeons of the Soul"Edit

Synopsis for "Dungeons of the Soul"Edit

This story features a king of a castle, Modrius, who acts cold towards his lover, Adrianne. A prisoner with a mask is held in the dungeon, who has been there since Modrius got a sorcerer to cast a spell on him that would keep him from suffering. Adrienne lets the prisoner go, and when Modrius removes the prisoner's mask, it is revealed that it is him. He then turns back to normal again.

Appearing in "The Picture of Death"Edit

Synopsis for "The Picture of Death"Edit

A man traveling through Scotland comes across an inn and stays in a room where people have disappeared in before. The room contains an odd painting reminiscent of Hieronimus Bosch. As the man falls asleep, bizarre creatures start crawling out of the painting and pull him inside. Eventually they bring him to a beautiful young woman who is to be his companion. She soon transforms into a bizarre beast however, and he flees. The next day, the maid comes into the room and finds him gone. But the painting has now changed, with him in it!

Retrieved from "https://heykidscomics.fandom.com/wiki/Creepy_Vol_1_45?oldid=106682"
Community content is available under CC-BY-SA unless otherwise noted.