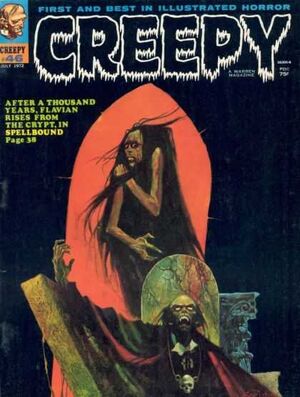 Appearing in "Cross of Blood"Edit

Synopsis for "Cross of Blood"Edit

This story is about a vampire, how he became one, and the many deaths he encounters. He is able to survive death by being staked multiple times due to followers and others that end up pulling stakes out of him. Eventually however he is done in by his latest lover when the shadow of a cross becomes his doom.

Appearing in "Behold the Cybernite!"Edit

Synopsis for "Behold the Cybernite!"Edit

This story features an alien that exists solely as a brain; it is from a planet where all the lifeforms have given up their human bodies in exchange for robot ones controlled by their brains. He is told by his leader to take over Earth so they can use its resources. But his ship is damaged and he arrives in a junk yard where the entire ship, including him and his robot body are crushed.

Appearing in "On the Ninth Day of Satan"Edit

Synopsis for "On the Ninth Day of Satan"Edit

This story features a man that comes to a village in search of a friend, finding that the villagers are wary of him because they are said to be in the clutch of Satan. This includes Cerberus, an agent of Satan that appears in the village as a human.

This story features a scientist who creates a formula that can make a person invisible. He uses it on himself then goes to sleep. He awakens later to find that it only partially worked; his skin is now invisible, but his organs are clearly visible! He goes to the lab to try and find a solution and passes out. An intern responsible for disposing of bodies then thinks he is one, and puts him in the furnace!

A powerful knight, Delmar is recruited by an old crone to obtain a magical box from a neighboring kingdom for her. In exchange, he will rule the country by her side. He travels to the neighboring country where he rescues a beautiful woman, Eileen from a pack of wolves. She brings him to her home where she lives with Flavin, a scholar. When Delmar follows Flavin to the basement to find where the box he is looking for is he is imprisoned. Eileen frees him, under the assumption that he'll depart with her. But he instead takes the box and leaves on his own. As soon as he leaves with the box the entire castle and its inhabitants, including Eileen and Flavin decay and die. Delmar returns the box to the crone, who immediately becomes young and beautiful. He passes on his reward however and leaves.

It features a pair of night watchmen who for fun go hunting for bats during their shift. One of the men comes across a vampire during his hunt and is bitten by it. Later the other man goes hunting and ends up killing his former colleague, who is now a vampire himself.

Appearing in "Friedheim the Magnificent"Edit

Synopsis for "Friedheim the Magnificent"Edit

A daredevil is famous for his ability to jump from high heights and survive the fall. In actuality he only survives the falls because of a deal he has with two men who have the power to keep him alive. When they request he uphold his part of the bargain by killing himself however, he refuses and instead kills one of the men. The next day he goes on his latest jump however and falls straight down to hell, into the hands of their master, Satan.