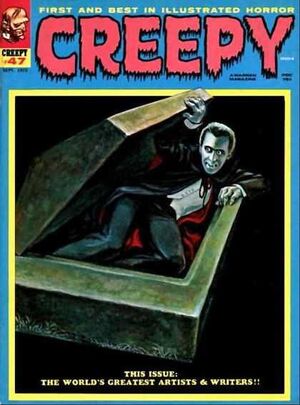 Appearing in "The Land of Bone"Edit

Synopsis for "The Land of Bone"Edit

This story features a warrior Costan who finds himself in a world where every person he meets is a skeleton. He is joined by a skeleton wizard, Wikkander, who tells him that his lover Aruna has been captured by the Wizard Poxxalt. The two of them fight off various creatures and then defeat Poxxalt. Costan is shocked to find Aruna a skeleton herself, and gives Wikkander a ring on her finger. Once he gets the ring, the truth is revealed. Costan was a skeleton himself, and only thought that he was human and everyone else was a skeleton. Wikkander, a descendant of his brought him to life to free Aruna from Poxxalt.

Appearing in "Mark of the Phoenix!"Edit

Synopsis for "Mark of the Phoenix!"Edit

This story features a student drug dealer who finds that he is dying of cancer. In order to live forever, he makes a deal with a Phoenix which will enable him to live forever, unless his body is completely destroyed. The Phoenix tells him that he will have to be set ablaze and reborn every 10 years however, and this frightens him terribly. He gets so nervous of a pigeon following him that he ends up killing himself for good.

Appearing in "The Law and Disorder"Edit

Synopsis for "The Law and Disorder"Edit

This story features a man who is angry at the board of trustees of a college, thinking they are responsible for his father's death. He creates a disintegration ray which he lets into their hands, and they die of radiation once using it. The protagonist then dies suddenly at the end of the story, with little explanation.

Appearing in "The Eternity Curse"Edit

Synopsis for "The Eternity Curse"Edit

This story features an enemy of the pharaoh who is cursed to live forever. His corpse lies in the ground for thousands of years, getting out in present times, when he starts attacking some victims of a plane crash, absorbing their life force until he is restored to a normal appearance.

Synopsis for "Point of View"Edit

This story features a number of stories all converging into one. A man is fearful of a powerful being that he suspects is after him. In another a woman leaves her boyfriend very frantically. In the third, an older man drives drunk despite his wife's warnings. All converge when the car is about to hit the woman, and our protagonist notices a caped woman distracting her, who is actually the person he is fearful of.

Appearing in "This Burden This Responsibility!"Edit

Synopsis for "This Burden This Responsibility!"Edit

This story features a man in a future where computers run almost everything. He gets a bigger office for his good work, then gets in trouble when he comes in late, being killed by his computerized superiors.

It takes place in a future Earth where normal humans are fighting mutants who have mutated due to contaminated food. One of the human soldiers sees a beautiful woman whom he becomes obsessed with seeing. He finds her, then fights off a superior who calls her Queenie. She brings him through a wall where he finds out the truth, that she's a mutant and she's lured him to other ones who seize him.