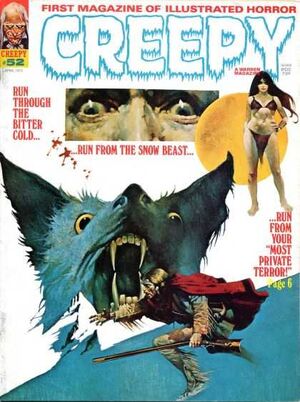 Appearing in "A Most Private Terror"Edit

Synopsis for "A Most Private Terror"Edit

This story takes place in a winter setting, featuring a man hiding in a cave from a snow beast. He thinks to a past encounter with such a beast, which was a beautiful woman who turned into a werewolf that he had killed. Realizing he's going to freeze to death, he sets himself on fire, then once putting the fire out heads out of the cave. He becomes so frightened however that he falls off a cliff to his death. It is revealed at the end however that all that was following him was a little white rabbit.

Appearing in "The Last Hero!"Edit

Synopsis for "The Last Hero!"Edit

This story takes place in a future where robots run society and man's life is full of leisure. A cult of bald headed men rebel against this and destroy as many robots and factories as they can. The hero of the title decides to become a superhero and fight against them, but they capture him and brainwash him such that he becomes another one of them.

Appearing in "Halve Your Cake and Eat It Two"Edit

Synopsis for "Halve Your Cake and Eat It Two"Edit

This story takes place in a post apocalyptic world where a man finds himself seemingly alone. He eventually meets a woman and a dog and they stay together. They are attacked by a bizarre looking mutant but make it out okay. He eventually heads out to find some uncontaminated food and when he returns, finds a mutant that has seemingly killed the girl and dog. He kills the mutant then eats it. He wanders off, coming across other normal people, only to find out that he is now a mutant, as he actually ate her, she mutated after eating the dog. The normal people, seeing him as a mutant, kill him and eat him, staring the cycle all over again.

Appearing in "Them Thar Flyin' Things!"Edit

Synopsis for "Them Thar Flyin' Things!"Edit

A sheriff heads home to see his family. He sees his mother, but his younger sister is off trying to hook up with a man, Ronald who does nothing but fish. Heading through the woods, she spots a flying saucer with aliens coming out of it. She tells Ronald, but he ends up being an alien scout himself and kills her to keep things a secret.

Appearing in "The Man with the Brain of Gold"Edit

Synopsis for "The Man with the Brain of Gold"Edit

This story is about a boy born with an extremely large head. One day it is discovered that his brain is actually made of gold. When his parents ask him for some of the gold from his head, he does so, then goes off on his own, spending for things by taking some of his brain out. He eventually gets married to a woman who causes him to spend even more money, but she soon passes away. At her funeral he sees some shoes that he likes and tries to take more gold out of his head, but by this time he's taken all of it and he dies.

The story is about a man who gets married but does little to distinguish himself in life. This upsets his wife, whom he suspects is having an affair. One day he finds his wife stabbed to death and suspects he did it. He runs off and ends up getting hit by a car and killed. It ends up however that it was a burglar who killed his wife and he was innocent all along.

Retrieved from "https://heykidscomics.fandom.com/wiki/Creepy_Vol_1_52?oldid=106689"
Community content is available under CC-BY-SA unless otherwise noted.