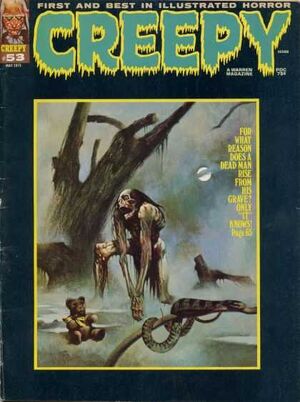 Appearing in "A Scream in the Forest"Edit

Synopsis for "A Scream in the Forest"Edit

1 of 6
Add photo
A society of dwarfs is plagued by Faeries, large one eyed beastly creatures that kidnap their women for food. Screams echo throughout the forest, most likely from their victims. One of the dwarfs, Ussel, is nearly captured by one, but is saved by Arn, a powerful swordsman. Arn agrees to help Ussel wipe out the Faeries and they head through the woods, fighting off another one along the way. Eventually they come across a large cave, and inside Arn knocks out Ussel, handing him over to the Faeries. Arn is actually working with the Faeries, capturing them prey in exchange for diamonds. Ussel awakens just as they are about to eat him, and there is another scream in the forest.

Appearing in "The Stone of Power!"Edit

Synopsis for "The Stone of Power!"Edit

This story features a boy who finds a mysterious stone with power. He brings it to his home, but a witch takes the stone from him and kills his mother. The boy grows up, and plans to take back the stone, managing to do so. But his memory isn't what he thinks it is. The witch is actually his mother, whom he ends up killing. He takes the stone for himself, with an evil look in his eye as the story ends.

Appearing in "Freedom's Just Another Word"Edit

Synopsis for "Freedom's Just Another Word"Edit

A black family, the Turners, moves into a town of nothing but white people. One of the young women in the town, Rosie befriends Charles, one of the Turners, and this greatly upsets her father. Her father starts getting the townsfolk riled up, claiming that the family are a bunch of witches, and are responsible for ruining their crops and killing their farm animals. A group of the men go to the Turner's house and beat then kill the entire family, except for their paralyzed grandmother, who actually is a witch and summons lightning which kills them all.

Appearing in "The Creature of Loch Ness!"Edit

Synopsis for "The Creature of Loch Ness!"Edit

A pair of men, one a believer, one a skeptic go to Loch Ness to search for the Loch Ness monster. Initially they have no success, finding mostly driftwood, but eventually they find one and take some pictures of it. The pictures reveal it to be a fake, as it is actually just an inflatable monster owned by a hotel owner nearby who uses it to bring in tourists. The hotel tourist soon finds himself the prey of the actual Loch Ness monster however.

Appearing in "The Night the Creatures Attacked"Edit

Synopsis for "The Night the Creatures Attacked"Edit

This story, based on actual eyewitness accounts, tells of a home in Kentucky attacked by alien creatures. The people in the home are able to frighten them off by shooting at them.

This story features the corpse of Timothy Foley coming back from the grave and traveling around searching for someone, scaring to death everyone who comes across him. By the end it is revealed that he was simply looking for his lost teddy bear.

Retrieved from "https://heykidscomics.fandom.com/wiki/Creepy_Vol_1_53?oldid=106690"
Community content is available under CC-BY-SA unless otherwise noted.