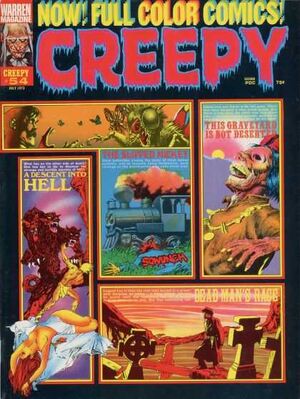 1 of 5
Add photo
It features Diment, a crazy old man taking over hosting duties from Uncle Creepy and telling some bizarre tales about a psychologist and his family. The psychologist is attacked by butterflies, a TV eats his wife, and a bone buries his dog.

Appearing in "This Graveyard is Not Deserted"Edit

Synopsis for "This Graveyard is Not Deserted"Edit

An outlaw shoots out a native American boy's eyes; later the boy's ghost gets his revenge and tears the outlaw's eyes out.

Appearing in "Descent into Hell"Edit

Synopsis for "Descent into Hell"Edit

A god goes to hell to find a mortal woman he had loved. Finding she is gone forever, he spurns Zeus and becomes Atlas, cursed to hold Earth on his back.

A wealthy man's brother passes away and is set to be buried on the same day as his lover, who also died. The brother fears that if his dead brother is the last buried in the graveyard (it has only two graves remaining) he will be cursed, so he races the hearse as fast as possible to beat the hearse of his brother's lover. He doesn't win, so he kills his driver and has him buried instead of his brother. But the driver comes back from the dead and has him buried, resulting in the man becoming the cursed ghost.

A pair of men come across Liliput, the city of miniature people from Gulliver's Travels. They find a book where one of the little people tells how some of them traveled with Gulliver, but became vampires. The last one was possessed and was able to bring the vampires back to Liliput, getting them all killed. In the present day, the explorers leave the island after miniature vampires attack only to come to another island with vampires, giant ones.

Retrieved from "https://heykidscomics.fandom.com/wiki/Creepy_Vol_1_54?oldid=106691"
Community content is available under CC-BY-SA unless otherwise noted.