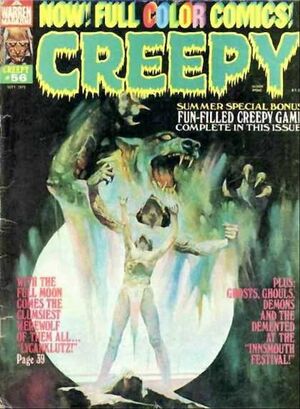 Appearing in "In My Father's House!"Edit

Synopsis for "In My Father's House!"Edit

1 of 6
Add photo
This story features a detective investigating the death of a man tied to a stone angel in a graveyard. While investigating multiple attempts are made on his life and he meets various crazy women that used to know him. Eventually he finds that the murdered man was the leader of a Satanic cult who became too greedy with power. Satan himself appears and recruits the detective to be the new leader, but he too becomes too greedy and is eventually killed because of it.

An editor for a magazine about (usually fake) supernatural events is summoned to Innsmouth by a letter from two women, who incidentally end up being the only normal looking people in the town, which is controlled by hideous looking creatures that worship Ctulhu. They capture the women, hoping to sacrifice them to their watery God, and the editor tries to help them. They are able to kill the 'God' and the various mutants using a laser gun given to the editor by an old woman. At the end of the story it is revealed that the women aren't really human themselves, as they have wings.

Appearing in "Consumed by Ambition"Edit

Synopsis for "Consumed by Ambition"Edit

A count from Europe heads to Venezuela where it is revealed that he is a vampire. A young man he meets is attacked by him, but he has ambition of being a vampire and lets him join him. Eventually the young man becomes too ambitious however, and puts a stake in his master's heart. He demands a daily sacrifice from a nearby tribe, but is soon done in by man eating ants. His skeleton remains alive for many year after however as a stake wasn't used on him.

The story takes place in a kingdom plagued by a werewolf. An old man offers to rid them of the werewolf with fleas, which cost $500. The king agrees to use them, but betrays the old man, tying him up as bait so he doesn't have to pay him. The werewolf arrives, but the old man bargains with him for a flea collar and the werewolf instead attacks the king.

Appearing in "The Way of All Flesh"Edit

Synopsis for "The Way of All Flesh"Edit

This story features a blind old vicar who has no one attending his church any longer. A friend tells him to give up, then returns home where he finds his wife dead. Many other deaths have occurred around this time as well. By investigating, our protagonist eventually finds the vicar, preaching to the corpses of all the murdered people. The vicar then passes away, and all their corpses crumble to dust.

Appearing in "The Bell of Kuang Sai"Edit

Synopsis for "The Bell of Kuang Sai"Edit

This story features a bell maker, Kuang Sai, who is hired by his lord to make him a bell. When he makes the bell however it has a large crack in it. He tries again and again, but each time it has a crack. The lord offers him three more chances, after failing on the first two he sacrifices his daughter, pushing her into the bell's liquid material before it is poured into the mold. This results in it finally working. This causes the bell to emit a strange shriek from her whenever it is rung however.

Retrieved from "https://heykidscomics.fandom.com/wiki/Creepy_Vol_1_56?oldid=106693"
Community content is available under CC-BY-SA unless otherwise noted.