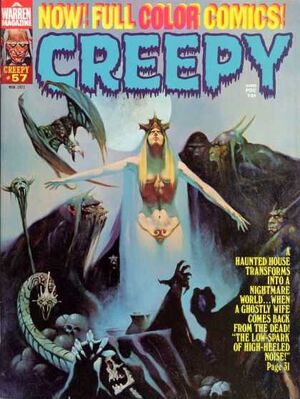 Appearing in "The Destructive Image"Edit

Synopsis for "The Destructive Image"Edit

Appearing in "The Hope of the Future"Edit

Synopsis for "The Hope of the Future"Edit

It features a man barricaded in a house, surrounded by evil children who are trying to get in. He eventually gives in and heads downstairs where the children, including his son, await him.

Two parents carry a bound man through their own museum, featuring various corpses of people that did them wrong in the past, brutally murdered. The bound man finds a similar fate awaiting him, as he was the military recruiter that convinced their dead son to join the military, resulting in him dying in Vietnam.

Appearing in "The Low Spark of High Heeled Noise!"Edit

Synopsis for "The Low Spark of High Heeled Noise!"Edit

A traveling salesman comes across a house during a storm. The couple inside reluctantly lets him sleep there. The man overhears the couple arguing, apparently they killed the man's former wife, but suspect each other due to them hearing footsteps of the other during the night. Eventually the man kills the woman and the salesman kills him in self defense. He soon dies however when he drinks something that the woman had poisoned. Only then is the one who started the footsteps revealed, the ghost of the man's dead wife.

Appearing in "The Red Badge of Terror"Edit

Synopsis for "The Red Badge of Terror"Edit

This story takes place in the civil war. A pair of soldiers pursue an enemy, eventually coming across an abandoned town. Only the town isn't abandoned after all, but contains a vampire, that attacks them. They then wait for more soldiers to come along who they can attack.

Appearing in "Sense of Violence"Edit

Synopsis for "Sense of Violence"Edit

A nervous man wanders down an alley and when a man approaches him he stabs him in self defense and runs off. Only it ends up that the man who approaches him was actually just a cop asking for ID, and our protagonist is soon arrested.

Retrieved from "https://heykidscomics.fandom.com/wiki/Creepy_Vol_1_57?oldid=106694"
Community content is available under CC-BY-SA unless otherwise noted.