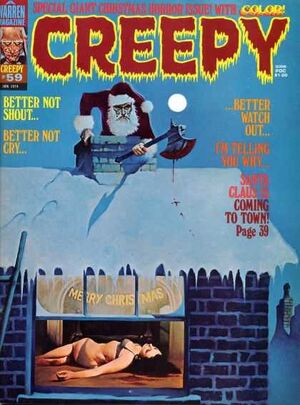 1 of 6
Add photo
Hundreds of years ago a servant is suspected of being a witch when she tries to remove some leaves from her master's daughter, which is supposed to ward off a vampire that's been plaguing the village. In actuality she is a witch, and is betrayed by her boyfriend Oliver multiple times, who reveals her as a witch, then frames her as being a vampire when he is actually the vampire. Hundreds of years later however she gets revenge by getting him fried by the sun.

Appearing in "A Dark and Violent Place"Edit

Synopsis for "A Dark and Violent Place"Edit

This story is about a phantom of the opera type masked killer who occupies a theater. A pair of detectives investigate the killer, who repeats acts of violence from the films played there, such as throwing acid in the face of a man in the front row. One of the detectives is killed by the masked killer, and the other one starts going out with one of the witnesses. She is eventually kidnapped by the killer who is revealed to have had acid thrown in his face, making him a freak. The detective fights him and the killer is electrocuted to death.

Appearing in "Spare that Tree!"Edit

Synopsis for "Spare that Tree!"Edit

This story is about a rich man who becomes quite ill. One of his servants explains to the doctor that the rich man got sick as a boy and a man helped cure him through some treatment involving a tree. This resulted in the rich man's fate being tied to the tree however, if the tree gets harmed, so will he. Unfortunately for him, he doesn't know which tree it is, and he has one of his servants hung for chopping down a tree. The servant's brother however, the man who summoned the doctor, gets revenge by using as firewood the tree tied to him, causing the rich man to die of a fever.

Appearing in "Bless Us Father"Edit

Synopsis for "Bless Us Father"Edit

This story features two concurring storylines that eventually come together at the end. In the first a crazy man's parents talk about him while he dresses up as Santa Claus and goes on a murderous rampage. In the second a girl talks to her mother about her father, who is a cop in the same city as the killer. The cop and killer eventually meet and while injured, the cop is able to kill him.

Appearing in "Curiosity Killed the Cat"Edit

Synopsis for "Curiosity Killed the Cat"Edit

This interesting story is about a hippie hitchhiker who comes to a new town only to immediately be suspected for murder when the clerk at a hotel he goes to ends up dead. He is bailed out of prison by a beautiful woman and they investigate some men in black that have been following her. They eventually find the UFO that the men in black came from, but our protagonist figures out the truth, that she's an alien as well, and is able to escape from her.

Appearing in "Not a Creature was Stirring"Edit

Synopsis for "Not a Creature was Stirring"Edit

This story features a maniac whose been killing Santa Clauses and the detectives investigating the murders. The murderer finally explains himself on his last Santa victim, he's upset at 'Santa' for lying to him about his brother coming home alive from Vietnam when he was a kid. The killer gets away from the cops but is miraculously found dead on the roof of a building, as if he was run over by a reindeer.

Retrieved from "https://heykidscomics.fandom.com/wiki/Creepy_Vol_1_59?oldid=106696"
Community content is available under CC-BY-SA unless otherwise noted.