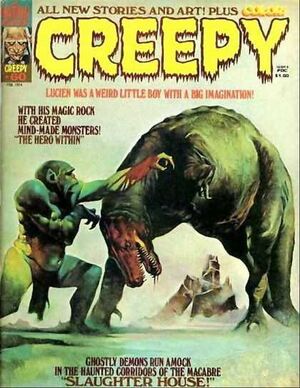 A couple with a new baby move into a house that has been rumored to be haunted by a dwarf-like creature. They summon a good spirit and when the dwarf creature arrives it is able to save them and rid the house of the creature for good.

Appearing in "A Most Precious Secret"Edit

Synopsis for "A Most Precious Secret"Edit

A man's wife discovers the horrible truth, that he's a vampire! To keep his secret, the man kills her and drinks her blood. The story brings us back in time, telling how they got married and how he was able to keep his secret from her. Back in the present the man receives a call from his lawyer telling him that his wife was seeing him to draft a will, because she has leukemia, cancer of the blood!

Appearing in "The Hero Within"Edit

Synopsis for "The Hero Within"Edit

The story features an orphan with a wild imagination whose brought to a new foster home where his foster mother and sister treat him horribly, subjecting him to the wrath of their dangerous dog. The boy, locked in the basement finds a magic donut shaped rock on the ground and uses it to imagine himself in a prehistoric world, where he's a powerful monster warrior battling the dog, who has now changed into a Tyrannosaurus Rex. While he succeeds in his battle with the beast, he loses the magic rock and reverts to the real world, where the wounded dog gets his revenge.

An alien race plans on infiltrating Earth and has an agent in France approximately 200 years ago. The alien agent, Fortran, publishes a book revealing all the alien's plans, thinking that it is so crazy that everyone will think he's crazy and ignore the true danger. His plan initially works, but one drunk who does believe him ends up destroying his entire house, killing the both of them, when Fortran's superiors check in on him.

Appearing in "The Other Side of Hell!"Edit

Synopsis for "The Other Side of Hell!"Edit

The story features a town drunk who has died and finds himself in hell. He desires to get away and suddenly finds himself in an Egyptian-esque realm where he kills the king and takes his Queen. He becomes power hungry and eventually kills her as well. But he soon realizes that he never left hell.

Retrieved from "https://heykidscomics.fandom.com/wiki/Creepy_Vol_1_60?oldid=106697"
Community content is available under CC-BY-SA unless otherwise noted.