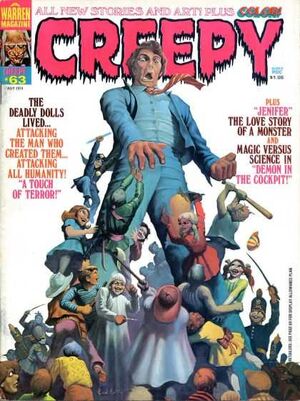 A hunter comes across a female cannibalistic monster about to be beheaded by a man with an ax in the woods. He shoots the assailant and feels compelled to adopt the girl despite how ugly she is. His wife and children leave him when he refuses to part with Jenifer and Jenifer compels him to play the role of her husband. After she catches and eats a little boy, the man finally gains the resolve to kill her... or so he thinks. The next thing he's aware of, he and Jenifer are in the woods and Jenifer is bent over a tree stump with her hands bound and he is sitting across from her with an ax. He realizes her power over him is as strong as ever and, as nearby footsteps are heard, he begs her for his life but she compels him to appear to be about to behead her and he is shot dead just the way the story began.

Appearing in "A Touch of Terror"Edit

Synopsis for "A Touch of Terror"Edit

This story features an investigation of a security guard at a warehouse. The owner of the place is in argument with the person conducting the investigation, as the guard was hired without his consent. The owner is in charge of little toy dolls called Nymatoids, which he uses to kill the investigator. He thinks he'll be able to rule the world with them, but the Nymatoids aren't actually controlled by him, but act on their own, and eventually kill him too.

Appearing in "A Ghost of a Chance"Edit

Synopsis for "A Ghost of a Chance"Edit

A man heads into a haunted mansion because it is rumored a treasure is inside. In the mansion he is confronted by the ghost of the man who lived there, who gives him his treasure, a coffin. It ends up that the man is turned into a vampire, so that certainly was a sensible gift for him.

Appearing in "Demon in the Cockpit"Edit

Synopsis for "Demon in the Cockpit"Edit

The United States government works on their latest weapon to defeat the communists - summoning a demon from hell which they successfully are able to do. Unfortunately for them, the communists have the same idea and use their own demon to attack.

A man on a yacht is very jealous of a competitor who won over a woman he liked. When the ship mysteriously crashes into something, they find themselves in shark infested water. Eventually it is just our protagonist and his competitor left, using some drift wood. When a ship approaches, our protagonist fights off his competitor to make it to it... but it is not a ship but actually a giant shark, the entity which destroyed the yacht in the first place.

This story features a hospital where clones of criminals have been developed that are used so that their organs can be used to give to other people. One of the clones comes to life and goes on a rampage, taking back his organs that were taken from him. He then returns to the hospital, including a ridiculous sequence where he runs amok with a machine gun, and takes back his final organ from the doctor that developed him. In a nonsensical final twist, the clone reveals he is a cannibal, and that he has been eating all the organs he took back.

"Jenifer" is reprinted in Berni Wrightson Master of the Macabre #2

Retrieved from "https://heykidscomics.fandom.com/wiki/Creepy_Vol_1_63?oldid=106700"
Community content is available under CC-BY-SA unless otherwise noted.