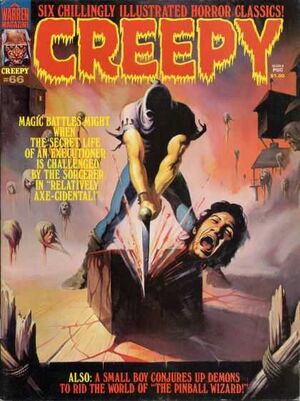 A man goes to a pyramid in Egypt and finds out about how it belonged to a pharaoh who dismissed the gods. A god actually came down and cursed him forever, locking him in the pyramid. The man heads inside the pyramid and finds the god, which is actually an alien, which brings him to his planet as punishment.

Appearing in "Portrait of Death"Edit

Synopsis for "Portrait of Death"Edit

An artist digs up a corpse to use in a painting and is blackmailed by a fellow grave digger, whom he kills and also uses in his painting. The painting comes to life however, and kills him, bringing him into the painting as well.

A group of outlaws takes over a desolate town in the desert. When they decide to stay though, it is revealed that the townsfolk are actually werewolves, and they kill the outlaws.

Mobsters pressure the owner of a candy store to put in a pinball machine and when he refuses kills him. A boy who befriended the old man summons a demon who kills the mobster, and brings him to hell where he acts as the ball for a pinball game.

An executioner sets up his brother in law, who knows his true identity, by accusing him of being a sorcerer. Only the same thing ends up happening to him when his angry wife accuses him of the same. Her brother's decapitated corpse ends up being the executioner.

The story features a man having a recurring dream about encountering bizarre looking cloaked monsters. At the end of the story when life goes just like the dream, the man ends up going crazy.

Retrieved from "https://heykidscomics.fandom.com/wiki/Creepy_Vol_1_66?oldid=106703"
Community content is available under CC-BY-SA unless otherwise noted.