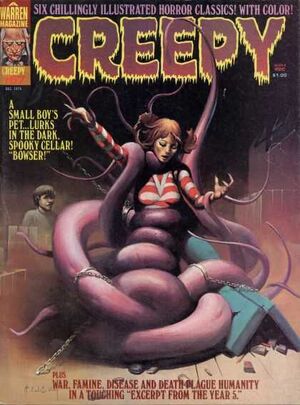 Appearing in "Excerpts from the Year Five!"Edit

Synopsis for "Excerpts from the Year Five!"Edit

1 of 6
Add photo
This story takes place in a future where all the power in the world has vanished. The story focuses on a man, who meets a woman when receiving first aid. They help fellow people and find a young boy eating the remains of his mother. Eventually Satan worshipers kill the boy however, and the woman dies soon afterwards as well.

Appearing in "The Haunted Abbey"Edit

Synopsis for "The Haunted Abbey"Edit

This story tells of a couple in Spain who comes across an abbey occupied by monks. Due to the weather they head inside. The monks tell them to stay in a cell, but they sneak out and catch them executing a woman by covering her up in an alcove with bricks. All of a sudden they find themselves years later, and all that's left of the woman is a skeleton. They head up through the Abbey to know find it completely in ruins.

Appearing in "The Happy Undertaker"Edit

Synopsis for "The Happy Undertaker"Edit

This story tells of an Undertaker who loves his work and takes a lot of steps to make money for himself. He eventually replaces his employees with homeless kids who work for room and board. They end up turning on him however when it is revealed that they are vampires!

Taking place in the age of the Crusades, the Church learns of a group of pagans that apparently possess the greatest treasure in the world. When they refuse to hand it over to be used for war, the church sends soldiers which kill them all. They then find the treasure... which ends up being the cross of Jesus Christ.

Appearing in "Oil of Dog!"Edit

Synopsis for "Oil of Dog!"Edit

Retrieved from "https://heykidscomics.fandom.com/wiki/Creepy_Vol_1_67?oldid=106704"
Community content is available under CC-BY-SA unless otherwise noted.