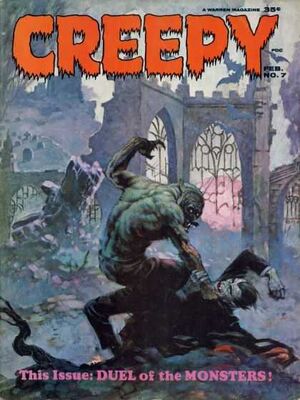 Appearing in "The Duel of the Monsters!"Edit

Synopsis for "The Duel of the Monsters!"Edit

A vampire finds that he has competition in the town he's in, a werewolf. The werewolf knows of him and plants a crucifix in his coffin. The vampire plots to get rid of the werewolf, thinking he knows who he is. He waits at the werewolf's house and kills him, only to find that the werewolf was actually someone else. The man he was suspecting was the werewolf appears, revealing it was a trap to get the two of them to eliminate each other, as he is a ghoul and wants no competition either.

Appearing in "Image Of Bluebeard!"Edit

Synopsis for "Image Of Bluebeard!"Edit

Monica’s new life married to Brian is very lonely and soon she begins to suspect that he spends time away from her because he is in reality Bluebeard! She works herself into a frenzy after seeing him through the guesthouse window using an ax and forbidding her to enter. She murders him with a knife and when the police come for her she opens the door to the guesthouse only to find that her husband was using an ax to construct cages for pets to keep his lonely wife company.

A man keeps having dreams of a glasses-wearing man attacking him with a knife. He's so freaked out by them that he falls out a window and is brought to the hospital, where he faces none other than the glassed man!

A wealthy ship owner brings people on tours of the sea, telling them of his ancestor who was a pirate. He is very cruel to his crew, causing them all to quit. He soon is able to gain a new crew, but it ends up that they are actually dead, killed by his ancestor, and they cause his ship to sink, leaving him at the bottom of the ocean with his ancestor's victims.

A young doctor joins another doctor who is responsible for teaching students about autopsies. He soon finds from that they are forced to revert to digging up corpses to get bodies, or buying them from other grave robbers. One such grave robber becomes quite a nuisance and is eventually killed by the older doctor and used as one of their patients. But when they dig up a new corpse to use from the cemetery, it ends up being him, and he comes back to life to get revenge.

Appearing in "Blood of Krylon!"Edit

Synopsis for "Blood of Krylon!"Edit

A vampire, who is finding it harder to find victims in a futuristic society decides to head to the colony planet of Krylon, where he thinks that it will be much easier to find victims. On the way there he kills all his fellow ship travelers, using them to feed himself. When he arrives at Krylon however, he soon dies when he finds out that the night is a lot shorter there.

A devil worshiper is captured by the townsfolk and set on fire at the stake. Before he dies however, he curses them. Years pass and his descendants all pass away. The town however has multiple people who die due to fire. The townsfolk think that an artist from out of town is a descendant of him, so they set his house on fire, killing his wife, then kill him too. But the ghost of the devil worshiper appears, saying that they've become as evil as he, and sets them aflame.

Retrieved from "https://heykidscomics.fandom.com/wiki/Creepy_Vol_1_7?oldid=106644"
Community content is available under CC-BY-SA unless otherwise noted.