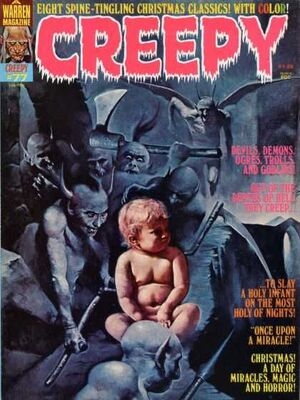 Appearing in "Once Upon a Miracle"Edit

Synopsis for "Once Upon a Miracle"Edit

This story features a pair of priests in a church witnessing an old lady who each year steals a statue of baby Jesus, something she's done each year since her own baby died due to the cold. While they're not watching a group of tiny demons arrive, but tiny cherubs arrive and stop them, then turn the baby Jesus statue to a real baby.

Synopsis for "The Final Christmas of Friar Steel"Edit

This story takes place in a monastery where many evil things start happening. An eye falls out of a statue of Jesus, which starts bleeding. The eye then appears in a wine cup they are drinking from. Corpses appear in the basement. It ends up a demon is behind the whole thing. The demon battles with the head of the monastery and the whole place burns to the ground.

This story takes place in a world where Santa Claus is dead and Christmas as it was no longer occurs. Shinny Upatree, the last elf left however decides to keep Christmas alive and goes out himself, although he can't visit every house each year. He visits an orphanage with a cruel housemaster, who Shinny smothers with a pillow. He doesn't end up dying though and the housemaster kills Shinny. A boy who witnesses it happen kills the housemaster, then takes over for Shinny as the one keeping Christmas alive.

This story is about an old man who sells threads and buttons on the street to make enough money to buy a candle for his dead wife each year. This year he meets a young girl whom he reads to. It ends up being a ghost of his dead wife. He dies soon afterwards.

Appearing in "The Final Gift"Edit

Synopsis for "The Final Gift"Edit

This story features a trio of men in a wintry future. They are unable to find much salvageable food due to poachers that have ravaged any stores they are able to find. Eventually one kills himself so the others can eat him, but it ends up happening when they finally find a town with other people that they can stay with.

Appearing in "The Final Christmas"Edit

Synopsis for "The Final Christmas"Edit

Within a church in Brooklyn the devil arrives. He tells the sole priest left at the church, which no one visits, even on Christmas that it is time for him to take over the world. He makes a bet with the priest that he'll let the Earth be if he can find many righteous people, telling off anyone who the priest tries to name. Very arrogant, he lowers the bet down to a single person, then loses out when a boy enters the church to pay his respects to Jesus.

"Clarice" is reprinted in Berni Wrightson Master of the Macabre #2

Retrieved from "https://heykidscomics.fandom.com/wiki/Creepy_Vol_1_77?oldid=106714"
Community content is available under CC-BY-SA unless otherwise noted.