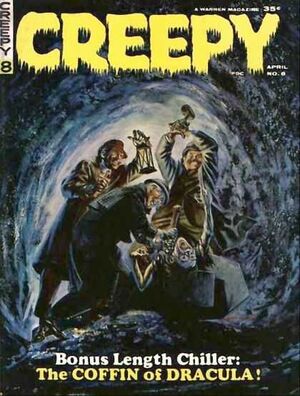 Appearing in "The Coffin of Dracula!"Edit

Synopsis for "The Coffin of Dracula!"Edit

1 of 7
Add photo
A man comes into possession of Dracula's coffin and sits in it, becoming Dracula himself. He invites people to his mansion then steals one of the women and runs away with her. The Van Helsings start looking for him and find a monster in a cave.

A mysterious plane shoots down both Germans and Americans during World War I. One unlucky pilot sent to shoot down the plane manages to see the face of the one piloting this plane, and sees that it is his own. He is the next to die and his spirit is now condemned to fly the mystery plane unless he can replace it with that of another.

A woman wandering in the winter wilderness comes across a cabin on a mountain and meets a man inside who asks her to bring the town mayor to him so he can take over his mind. She does so and the young man reveals his true self, the Devil, who is able to wreak havoc on the world now that she has brought him a body he can use to escape the cabin in which he has been trapped.

A Baron gets in a car accident and comes across a mansion where vampires live. He convinces them to let him live as long as he brings them victims. He does, but eventually they turn him into a vampire as well.

In this story, a scientist convinces Adam to create a female robot, Eve, which he does. The scientist then manages to manipulate their minds using a helmet he puts on them and gets them to rob banks for him. Adam is freed of the helmet's influence when a friend stops by, but he is attacked by Eve and thrown over a cliff to his apparent demise.

Appearing in "A Vested Interest"Edit

Synopsis for "A Vested Interest"Edit

A man sees a werewolf but finds no one believing him except a single man he meets at a bar. The man brings him to an alley at night and reveals himself to be the werewolf. Our hero thinks he's tricked him, shooting silver bullets from his camera, but the werewolf has outsmarted him, wearing a bullet-proof vest!

This story features a grave digger who gets caught by the police in the act. He hides in a mausoleum and steals a dead man's clothes to escape, but the clothes shrink while he's wearing them, killing him.

Retrieved from "https://heykidscomics.fandom.com/wiki/Creepy_Vol_1_8?oldid=106645"
Community content is available under CC-BY-SA unless otherwise noted.