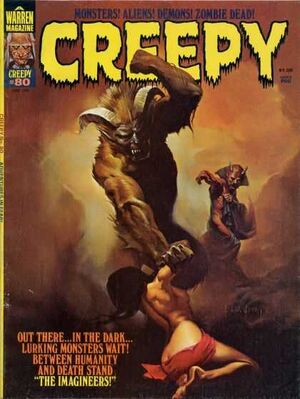 Appearing in "Benjamin Jones and the Imagineers"Edit

Synopsis for "Benjamin Jones and the Imagineers"Edit

A boy's toy soldiers can summon monsters. His mother doesn't believe him when he claims one is outside at night when she tells him to take out the trash. She heads out herself and is attacked by it.

In the distant future a man who grew up not knowing who his parents were seeks to find out by traveling back in time. He fails to find anything out, but finds a woman who he falls in love with. He is eventually caught by those who enabled him to go back in time, who kill him. When they leave his lover is blamed for his murder and put to death, but not before she gives birth to a boy, who ends up being the man himself.

Appearing in "The Fable of Bald Sheba and Montebank the Rogue!"Edit

Synopsis for "The Fable of Bald Sheba and Montebank the Rogue!"Edit

The story features a man ignoring warnings about visting the grave of the witch Sheba, and when he arrives at the grave he ends up not being able to escape because she grabs him. Or does she? It ends up that he had merely gotten stuck due to planting his sword in her grave which caught to his cape. Nonetheless, he passes away of a heart attack due to it.

Taking place in the late 1800s, the story features a man who invents a camera and goes to see patent attorneys who try to steal his idea. He takes revenge by poisoning them. An explosion ends up going in his darkroom however, killing him as well.

This story features a trench coated man with his face hidden from us by shadows capturing various people and suspending them in glass containers. He reveals that he is here to save humanity, which will soon face a nuclear holocaust, by using suspended animation to protect a select number of people who can later repopulate the world. The ending reveals his bug-like face.

Appearing in "The Axe-Man Cometh"Edit

Synopsis for "The Axe-Man Cometh"Edit

An axe murderer escapes from jail with the help of his sister and quickly returns to his axe murdering ways. His wife brings him home to meet his husband and then kills her husband, planning to blame it on her brother. Yet he discovers her plans and ends up killing her too.

Appearing in "The Last Chronicle"Edit

Synopsis for "The Last Chronicle"Edit

This story is a sequel to "The Escape Chronicle" from Creepy Vol 1 75. This story features Bernie pining for his old friend Charlie and wondering what wonders he is experiencing. Eventually Charlie returns and takes him away with him.

Jose Bea made his last Creepy appearance in this issue.

Retrieved from "https://heykidscomics.fandom.com/wiki/Creepy_Vol_1_80?oldid=186181"
Community content is available under CC-BY-SA unless otherwise noted.