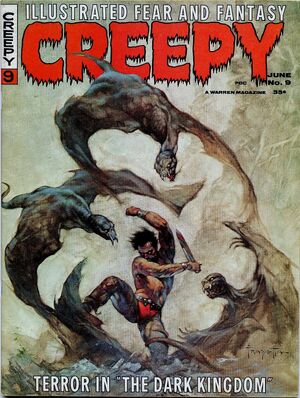 1 of 7
Add photo
A Spartan, Argo, finds himself in hell, battling various winged creatures, snakes and others. He's able to escape from Hades and live, with a scar on his back as a souvenir.

Appearing in "The Castle on the Moor!"Edit

Synopsis for "The Castle on the Moor!"Edit

A group of tourists in a castle find themselves under attack by a werewolf, the son of the castle's owner. Soon only two are left, but are able to kill the werewolf with a silver bullet. One of the survivors reveals himself a ghoul however, and kills the last remaining person so he can eat her.

Adam makes it to civilization, gets repaired, then takes on Eve in a new robot body. He defeats her, but ends up killing her. The man possessing her falls off a cliff soon afterwards.

This story is about a comic book artist who is finds himself plagued by the monsters from the stories he creates. He tries to stop, but keeps getting more jobs and finds himself in horrific situations. Eventually he becomes trapped within his own strip.

Appearing in "The Coffin of Dracula"Edit

Synopsis for "The Coffin of Dracula"Edit

A man who had sat in Dracula's grave becomes Dracula himself. The story surrounds a number of men pursuing him, who eventually are successful in destroying him.

Appearing in "Out of Time"Edit

Synopsis for "Out of Time"Edit

A mugger kills his victim, and is under pursuit from the police. He manages to escape using a portal which brings him to the 1700's. A man there tells him that he created the portal and wants to switch places with him. They do so, but our protagonist finds himself in just as bad a position as he's burned at the stake for witchcraft, which the person he replaced had been performing.

Appearing in "The Spirit of the Thing!"Edit

Synopsis for "The Spirit of the Thing!"Edit

Retrieved from "https://heykidscomics.fandom.com/wiki/Creepy_Vol_1_9?oldid=106646"
Community content is available under CC-BY-SA unless otherwise noted.