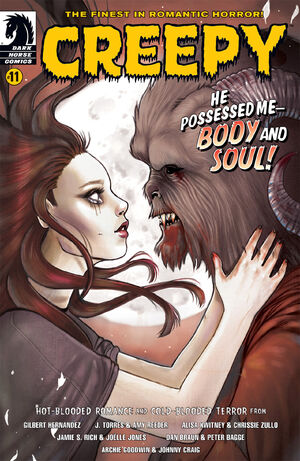 Appearing in "Two Faces Have I"Edit

Synopsis for "Two Faces Have I"Edit

A woman with large breasts who works at an asylum for the criminally deranged takes a vacation with her lover at a cabin in the woods. A two-headed inmate escapes the asylum, tracks her down and kills her lover. She dispatches the freakish man by planting an ax in first one head and then the other, splashing her boobs with its blood in the process. After she returns to work one of her coworkers asks her out and she accepts. He mentions that he would like to kill inmates too. She begins to unbutton her blouse and asks him if he would really like to kill inmates. He says he'll take out all you've got. When she displays her breasts, they have been transformed by the slain inmate's blood into heads which say in unison "Not if we take you out first!"

Appearing in "The Widower and the Mermaid"Edit

Synopsis for "The Widower and the Mermaid"Edit

A distraught man thinks that he sees his wife who drowned a year ago out in the waves. A local guide tells him that if the King of the Sea has turned his wife into a mermaid, he can get her back. What he doesn't know is that the guide is annoyed the mermaid is eating up all the fish and plans to sacrifice the man to his former wife so that he can go back to making money.

Appearing in "Curse of the Moon Maiden"Edit

Synopsis for "Curse of the Moon Maiden"Edit

A young girl goes out to the cemetery at night to meet her friend for a birthday celebration and encounters a werewolf. She finds him attractive and asks to be made love to. She is surprised to find that her sexual arousal transforms her into a monstrous creature which devours the werewolf. After shifting back into human, her mother comforts her and has a talk about safe mating behavior.

Appearing in "Eye of the Beholder"Edit

Synopsis for "Eye of the Beholder"Edit

Appearing in "Someone to Watch"Edit

Synopsis for "Someone to Watch"Edit

A man buys a house haunted by a girl. At first he enjoys having an audience when he makes out with his dates, but he comes to regret it when the ghost falls in love with him and becomes possessive.

Retrieved from "https://heykidscomics.fandom.com/wiki/Creepy_Vol_3_11?oldid=164551"
Community content is available under CC-BY-SA unless otherwise noted.