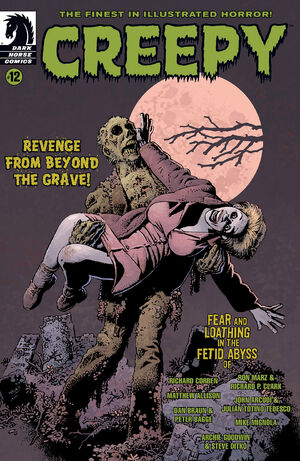 A woman gets drunk and falls to sleep on her dead husband's grave demanding to know where he hid money that he swindled out of some folks. To her shock, he actually tells her where he hid it. When she relates the news to her nephew and his girlfriend, they think her story about him coming back from the dead is the booze talking. They find the money, but corpse kills them and takes his wife back to his grave to bury her alive.

Two boys catch a large catfish and the one says to the other "You can catch anything with the right bait." On their way home, they pass an abandoned farm with a light on inside. Curious, they investigate and in the basement they find a beautiful fairy. As one boy approaches the friendly creature, it darts aside to reveal a loathsome fanged monstrosity. The boy loses a hand to it, but both manage to escape after locking it in and they head home with their catfish.

A film agent in the Philippines supplies horror directors with monster extras who are a bit too effective in getting into their roles.

Appearing in "The Spirit of the Thing"Edit

Synopsis for "The Spirit of the Thing"Edit

A flight crew crashes in the woods with only a single survivor and he is soon menaced by a pack of wolves. He tries to kill the alpha male so the pack will disperse, but his aim with the handgun is poor. His leg was hurt in the crash and he goes out to challenge the wolf with only one bullet left. He manages to shoot out one of its eyes and leaves it in the snow for dead as he slowly makes his way toward a settlement. As he goes he remembers his promise to the corpse of his captain that he will return for a full burial with honors. His reverie is interrupted by a low growl. It turns out he did not kill the beast after all. The wolf lunges at him when suddenly it stops, terrified. Before him is the walking corpse of his captain. The wolf lopes away, and at first the man thinks that his captain has saved him from the wolf, but the corpse drags the man back to the plane crash. He realizes as he dies in the plane that his captain doesn't want a burial with honors. A captain is only any good if he has a crew.

Retrieved from "https://heykidscomics.fandom.com/wiki/Creepy_Vol_3_12?oldid=164553"
Community content is available under CC-BY-SA unless otherwise noted.