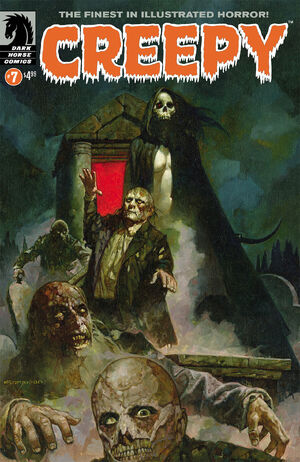 A boy who's bullied fashions some mud into a figure after his tormentors make him eat some of it and fantasizes about revenge. The figure comes to life and follows him to the other boy's home. It attacks and kills the bullies, to the child's dismay since he only wanted to teach them a lesson. He fears the creature will kill him next and he flees back to where he made it with the creature in pursuit. He fashions another mud monster to do battle with the first, but he realizes that the creatures are just reflections of himself and the second creature is filled with his fear and destroyed by the first. The boy decides to stop running and make a stand, but the creature merely tosses him into the river. He challenges the monster to come after him as him is no longer afraid, and the monster starts out into the water towards him, but by time it gets close to the boy the water dissolves it.

A woman and her husband who live with the wife's mother buy a chest at an auction that ends up containing the death shroud of Vlad the Impaler. They attempt to sell the shroud, but Vlad's spirit comes after them and impales the husband.

A man eliminates a town's vampire infestation by transmitting an infection to the town sheriff which transforms him into a were-mosquito. His plan is that the sheriff will eliminate the competition and then he will only have to kill the sheriff which he does by poisoning him.

Appearing in "The Ultimate High"Edit

Synopsis for "The Ultimate High"Edit

A westerner travels to Tibet to partake of a drug which holds the promise of the ultimate high, even though he is warned that he may spend his entire life on the drug. He takes three drops of the drug and has wonderful hallucinations, but when he comes down, he has the impression it was a brief trip. He looks into the mirror and sees he has become old. The monk who has replaced the deceased monk who was there when he arrived tells him that he has fed and cared for him all these years.

Retrieved from "https://heykidscomics.fandom.com/wiki/Creepy_Vol_3_7?oldid=164498"
Community content is available under CC-BY-SA unless otherwise noted.