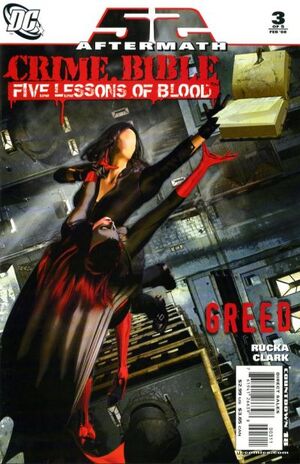 Appearing in "The Third Book of Blood"Edit

Synopsis for "The Third Book of Blood"Edit

The splash page is a reproduction of a page from the Crime Bible; The Third Book of Blood, Chapter 19, Verses 4-13. In it, the Grande, the leader of the city of Har-Mammon, hears of the First and Lilith and fears them. Thus when the First arrives outside the city's gates, the Grande sends a herald to deliver 1,000 gold to the First in exchange for the First leaving the city in peace. The First takes the gold but tells the herald he wishes to enter the city. The Grande sends the herald again, this time with 10,000 gold. The First takes the gold but declares he still wishes to enter the city. This time the Grande goes to the city gates himself and looks down upon the First. The Grande offers gems, wine, oils, slaves and stallions if the First will leave. The First learns the Third Lesson of Blood, that of Greed, and tells the Grande that originally all he wanted was water but has changed his mind having seen not only the wealth of the city but also that the Grande does not master his own greed. Thus the First enters Har-Mammon and takes everything he desires.

Appearing in "The Lesson of Greed"Edit

Synopsis for "The Lesson of Greed"Edit

Brother Flay meets with Penguin (after taking down all his guards) with a business proposition. He wants to auction off the Bastard's Folio, the second rarest known edition of the Crime Bible. Penguin states that it will take a month to arrange the auction and Brother Flay departs with a warning not to break the lock or read the book.

Renee returns to Gotham (after 18 months away and about 3 weeks behind Flay) and meets with Captain Maggie Sawyer who provides her with a lead: Flay has been to see Penguin. Renee leaves after brief encounters with James Gordon and Harvey Bullock. Shortly thereafter Renee finds Kate Kane who is upset that Renee repeatedly leaves her without a word. Renee updates Kate on her pursuit of the Religion of Crime and Kate offers to help. Kate knows of a local "coven" of the Religion of Crime and she and Question infiltrate it and coerce its leader, Sinclair, into telling them about the auction. At the auction, Sinclair is the highest bidder and while completing the transaction with the Penguin, Batwoman, who was present in disguise, takes Sinclair and Penguin's guards down - leaving with the book. They learn that Flay chose not to attend the auction.

Batwoman meets with Question but Batwoman refuses to hand the Bible over seeing it as sickening Renee's mind. Question attacks her to get the Bible in seeming greed, but Renee tells Kate she needs to learn about the Religion so she can destroy it...to save Kate. Kate hands the bible over and departs while observing Renee has never asked what Kate wants. On a train leaving Gotham City, Renee discovers the Bible to be a fake - full of empty pages except the final ones which read "The Word is not for you. Yet."

Retrieved from "https://heykidscomics.fandom.com/wiki/Crime_Bible:_Five_Lessons_of_Blood_Vol_1_3?oldid=1419866"
Community content is available under CC-BY-SA unless otherwise noted.