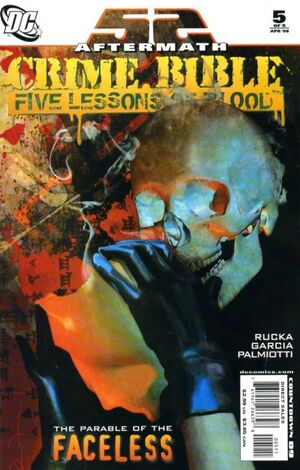 Appearing in "The Fifth Book of Blood"Edit

Synopsis for "The Fifth Book of Blood"Edit

The splash page is a reproduction of a page from the Crime Bible; The Fifth Book of Blood, Chapter 27, Verses 17-34. In it, the Caitiff goes to the city of Har-Mammon, now also called the City of Night, where he finds Lilith who now rules the city. Lilith has a vision of the Caitliff's past and future and sees what he must accomplish. She bestows some of her powers unto him by kissing his lost eye. Caitiff leaves the city and wanders into the desert, to the "shores of the abandoned" where he comes across a woman. She reveals that she is seeking knowledge and he tells her of the four lessons. She questions each in turn questioning Deceit with Truth, Lust with Regret, Greed with Charity, and Murder with Mercy. Realizing that she was without faith the Caitiff named her "Faithless" and decided to teach her the ways of his master.

Appearing in "The Parable of The Faceless"Edit

Synopsis for "The Parable of The Faceless"Edit

Renee Montoya follows the coordinates left by Flay and arrives at the Shores of the Abandoned - a junkyard of sailing vessels. Renee spots a crowd on the deck of one of the ships and approaches. They lower a rope ladder and she climbs up. They surround her and refuse to allow her to pass. Eventually she realizes they were expecting the Question and she dons the mask. Sister Shard escorts her to see Brother Flay. Flay and Renee talk and Flay describes her as a "devotee" which she denies. They discuss the lessons she has learned with her providing the appropriate responses countering Deceit with Truth, Lust with Regret, etc. Flay leads her outside where he explains the trial will begin. Flay and Question will fight to the death - the winner leads the order. Question refuses to fight so Flay summons Elicia who is held prisoner by Shard. If Question dies or fails to fight, Elicia dies. The fight begins but Flay loses confidence that Question is the one he was looking for. Question shoves Flay who impales his leg on ship debris. He tells Question to finish him off but she refuses. She confronts Shard who releases Elicia but Flay attacks once more. Questions knocks him back and he falls onto more debris fatally skewering him. Shard, Elicia and all members of the order drop to their knees and bow asking Question to command them.

Retrieved from "https://heykidscomics.fandom.com/wiki/Crime_Bible:_Five_Lessons_of_Blood_Vol_1_5?oldid=1419868"
Community content is available under CC-BY-SA unless otherwise noted.