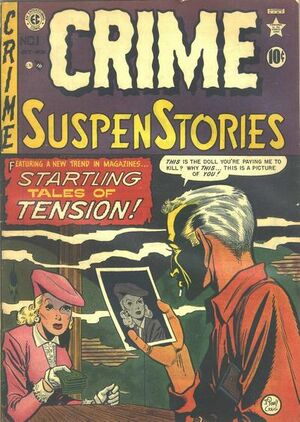 Appearing in "Murder May Boomerang"Edit

Synopsis for "Murder May Boomerang"Edit

1 of 4
Add photo
An escaped convict severely beats a man's father and steals his clothes. The man is incensed with rage and gets behind the wheel to take revenge. His father points out a man wearing hunting clothes and the son runs him down. They drive on a while further and the dazed father points out another man wearing hunter's clothes. The son realizes that his father is in shock and doesn't really know who beat him. The man he killed back on the road was an innocent man.

A woman loves a man's twin but marries him because he has money. When the twin returns they plot to kill the husband by drowning him in the lake. They see the husband in the doorway and wonder if he heard them plotting but he is friendly. They go into the lake and one man is drowned, but as time goes by, the woman begins to wonder if her lover really survived because he acts more and more like her supposedly dead husband. She begins to have close call accidents and thinks that her husband may have overheard their plotting after all and killed his brother and is now trying to punish her.

Appearing in "A Snapshot of Death!"Edit

Synopsis for "A Snapshot of Death!"Edit

A woman is told by a doctor that she has six months to live and decides to kill herself. She finds that she hasn't got the nerve so she hires an underworld character to rub her out. She gets a second medical opinion which states she has a good chance of a cure. She tries to call off the thug but he's already left. When a car pulls up, she panics. She tries to lock the door, but it's too late. A large man is framed in the doorway and pulls out her picture with the address on the back. She faints. When she revives, the man i.d.s himself as a policeman and says the thug was hit by a truck with her picture in his pocket and he was trying to find out information about him.

A convict kills a mail boat skipper and takes his place on the way back to the mainland from an island prison. The radio informs the four people on the boat that a prison break has occurred and they begin to suspect each other. Two of the men kill each other and the killer finishes off the remaining survivor and attempts to wade to shore, but the tide comes in and he drowns.

Retrieved from "https://heykidscomics.fandom.com/wiki/Crime_SuspenStories_Vol_1_1?oldid=106843"
Community content is available under CC-BY-SA unless otherwise noted.