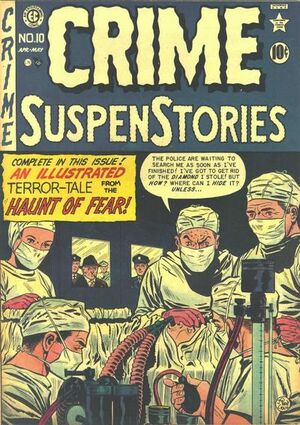 Appearing in "Rocks in his Head"Edit

Synopsis for "Rocks in his Head"Edit

1 of 4
Add photo
A surgeon steals a diamond ring from a patient and hides it in the skull of another patient suffering from a brain tumor, thinking that he can claim it after the man dies from the tumor. The man's widow has his body cremated, however.

A man shoots his wife when she returns home, but what he doesn't know is that she was out shooting his lover and framing him for the crime. He is executed for murdering his lover.

Appearing in "Missed By Two Heirs!"Edit

Synopsis for "Missed By Two Heirs!"Edit

Two men attempt to murder their step-father by sawing through the banister that he leans on when coming down the stairs. Their plan doesn't work though, because he gets a cane the day before they try it, but when the banister collapses, he suspects them of attempted murder. The one brother poisons his orange juice and leaves it with him. When they return, the old man is gone and orange juice has not been drank. He has left a note that he has taken a sample of the juice to police headquarters. The two sons give in to despair and drink the poisoned orange juice rather then spend the rest of their lives in jail. A cop shows up at the door and tells them their stepfather slipped on the ice, hit his head, and died so the officer is looking for his place of residence.

Appearing in "Friend to 'Our Boys'!"Edit

Synopsis for "Friend to 'Our Boys'!"Edit

A skinflint landlord is devoured alive by rats.

Retrieved from "https://heykidscomics.fandom.com/wiki/Crime_SuspenStories_Vol_1_10?oldid=106852"
Community content is available under CC-BY-SA unless otherwise noted.