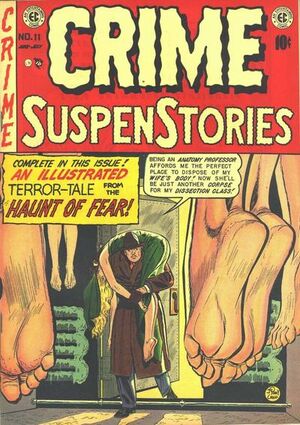 1 of 4
Add photo
A medical school professor kills his wife and mutilates her face so she can't be recognized and hangs her body in the meat locker for the students to examine. While the police are questioning him one of the students opens up the dead woman's gut and finds a wedding ring she swallowed during the scuffle. Faced with names and date inscribed on the wedding ring, the professor confesses to the murder and is led away, but the student who examined the body is puzzled the man bothered to kill her since she suffered from advanced cancer and would have died within six months anyway.

Appearing in "One Man's Poison!"Edit

Synopsis for "One Man's Poison!"Edit

A woman builds up an immunity to food poisoning so that she can murder her husband and have an alibi when a friend of hers sees her eating the putrid beans as well. She knows the friend won't eat them because he doesn't like them, but they are a favorite of her husband's. What she doesn't know is that her husband is deeply depressed about how their marriage has hit the rocks and poisoned the wine so that he may commit suicide. After she has a glass toasting his death, she hears the friend read the suicide note left by the phone telling her not to bother attempting to phone a doctor because the poison works very fast and that he's doing this because he never stopped loving her.

Appearing in "Two For One!"Edit

Synopsis for "Two For One!"Edit

Appearing in "Four For One!"Edit

Synopsis for "Four For One!"Edit

A man sets out to swindle a bank president into having a single check cashed five times. He opens an account with ten thousand dollars and tells the president that he's trying to impress a client and wants the bank to cash the check immediately as if he wrote checks like that all the time. The bank president agrees and requests five copies of his signature so that all five tellers can recognize it if they get the check. What the bank president doesn't know is the following morning, five men walk up to each window at the same time presenting the same check.

Appearing in "A Fool and His Honey Are Soon Parted!"Edit

Synopsis for "A Fool and His Honey Are Soon Parted!"Edit

A husband gets rid of a man making a play for his wife by framing him with the local native tribe. They stake him out with his body covered with honey for the ants.

Retrieved from "https://heykidscomics.fandom.com/wiki/Crime_SuspenStories_Vol_1_11?oldid=106853"
Community content is available under CC-BY-SA unless otherwise noted.