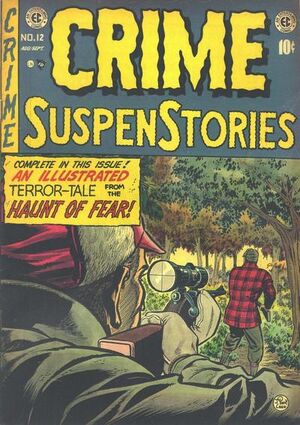 1 of 4
Add photo
The chief engineer responsible for pulling the switch on the electric chair was a witness to the whereabouts of the condemned man and could have provided an alibi, but keeps silent and pulls the switch.

Appearing in "Murder The Lover!"Edit

Synopsis for "Murder The Lover!"Edit

A man resolves to murder his best friend after he catches him with his wife and make it appear as a hunting accident. His first blast misses and goes into the underbrush, but his second shot kills the man. He tosses his rifle away in revulsion at the act he has committed, and that is when the charging wounded bull moose bursts from the underbrush and bears down upon him.

Appearing in "Murder The Husband!"Edit

Synopsis for "Murder The Husband!"Edit

A man who can't swim plots to murder his rival out on the lake, but the bullets he pumps through his victim go through the bottom of the rowboat and he drowns.

Appearing in "Snooze to Me!"Edit

Synopsis for "Snooze to Me!"Edit

When a husband threatens to walk out on his wife, she wrecks the car hoping to kill them both. They survive, so she pretends to be paralyzed so he won't leave her. He discovers she has been shamming, so she decides to kill him. She buries him in the cellar and later a fire breaks out. She stands up abruptly, but after so much time in the wheelchair, so loses her footing and falls. She finds that she actually cannot get up now and burns to death in the fire.

Retrieved from "https://heykidscomics.fandom.com/wiki/Crime_SuspenStories_Vol_1_12?oldid=106854"
Community content is available under CC-BY-SA unless otherwise noted.