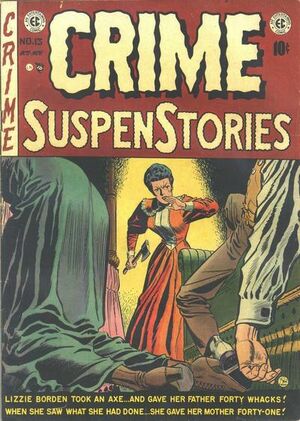 Appearing in "Hear No Evil!"Edit

Synopsis for "Hear No Evil!"Edit

1 of 4
Add photo
A woman plots to poison her deaf husband with her lover after the husband survives an automobile accident, but she's unaware that the accident has restored his hearing and he hears every word the two plotters speak so that he switches the poison cup and that the lover drinks it while the police arrest the wife.

A thirty year old woman becomes distraut when she imagines that her twenty three year old sister is plotting to steal away the man she wants to marry, so when she secretly follows them and sees them picking out a ring, she shoots the both of them. It turns out that her sister was helping the man to pick out the ring for his proposal to the killer.

This story continues the last one, only this time her trigger finger isn't quite so quick. She gives them a chance to explain and then she goes upstairs for a good cry and a nap. When she wakes, she finds the two of them gone. She examines the ring and sees that it is inscribed to her sister and they just lied to her.

Appearing in "A Question of Time!"Edit

Synopsis for "A Question of Time!"Edit

When the sheriff finds the body of a woman with her face cut off he assumes that a man who married the local tramp finally found out about her and snapped so he goes to him and tells him all the rotten things about his wife trying to get him to confess because the jury will understand and probably go easy on him if he surrenders himself. The man refuses to accompany the sheriff, and this puzzles him, but he goes off telling the man he'll be back with a posse. The man refused to go because he knew that he had not killed his wife, but he is so incensed by everything he's been told, he kills her when she returns home.

This story postulates that Lizzie Borden's axe is cursed to make the children who find it murder their parents.

Retrieved from "https://heykidscomics.fandom.com/wiki/Crime_SuspenStories_Vol_1_13?oldid=106855"
Community content is available under CC-BY-SA unless otherwise noted.