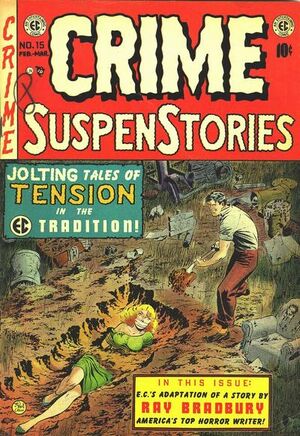 Appearing in "When the Cat's Away"Edit

Synopsis for "When the Cat's Away"Edit

1 of 4
Add photo
A man catches his best friend and wife together so he tells her that his friend has suffered a fatal accident because he knows she has a bad heart. The husband was supposed to have left town earlier so he knows that the friend will be coming over that evening. When he man knocks on the door, the shock kills the wife, and the husband shoots the best friend. He phones the police planning on telling them that he mistook his friend for a burglar in the dark.

Appearing in "The Screaming Woman!"Edit

Synopsis for "The Screaming Woman!"Edit

A man buries his wife alive in a lot and when a little girl hears her muffled screams, she can't get anyone to believe her. After the woman has been buried for some time she gives in to despair and sings a song quietly to herself but the little girl can still hear her under the dirt. She returns home and repeats the song to her father. The man finally believes his daughter as it turns out the victim of the crime is a woman he almost married years ago and the song was a song she had composed only for the two of them. He gets his friends together and they try to dig her up before she expires.

Two criminals escape in a boat that they bribed a guard for but they are betrayed as the guard does not bother to fill up the gas tank. They drift until one of them becomes delirious and drinks the water so the other shoots him and he pitches over the side. The survivor thinks too late that he could have drank the dead man's blood. Finally he shoots himself not realizing that their boat is actually drifting on fresh water.

Appearing in "And Not a Drop to Drink!"Edit

Synopsis for "And Not a Drop to Drink!"Edit

This story has the same setup as the last one with the difference being a jeep instead of a boat. The surviving criminal shoots himself and the bullet passes through his head into the jeep's radiator dropping water onto the corpse's mouth.

Appearing in "Hail and Heart-y!"Edit

Synopsis for "Hail and Heart-y!"Edit

A woman with a lazy husband learns he's been faking having a heart condition so she murders him and uses his ash on the snow outside.

Retrieved from "https://heykidscomics.fandom.com/wiki/Crime_SuspenStories_Vol_1_15?oldid=106857"
Community content is available under CC-BY-SA unless otherwise noted.