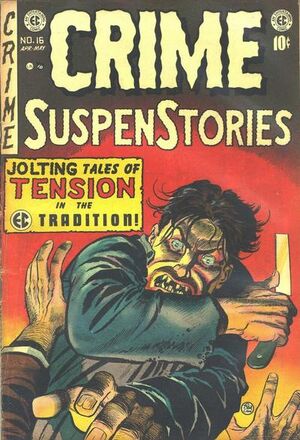 1 of 4
Add photo
An office pool takes out life insurance on any employee who flies as a little gag, but an embezzler sees a way out when it looks like he's going to be caught. He gives his manager a timebomb in a suitcase for his flight and then figures where the plane should be in the desert when the bomb goes off. He drives out to make absolutely sure his boss does not survive and when the bomb goes off, the plane falls directly onto him.

A man makes his fortune off the government's atomic bomb production and murders his wife to trade her in for a newer model. The cops pick him up when a prospector locates the body from the signal in the radium dial of his wife's watch.

When an innocent man is strapped into the electric chair and sponges are applied it jogs his memory too late about a detail that could have saved him at his trial for the murder of a tramp he'd been with. The witness testified that a man wearing a gray coat had been seen leaving the victim's apartment the night she'd been killed, but he hadn't been wearing his gray coat that evening as he'd been unable to get a spot out of it with a sponge and it was sent to the cleaners.

When a barber finds out that the bank president has cuckolded him with his wife, he goes after him with a straight razor.

Retrieved from "https://heykidscomics.fandom.com/wiki/Crime_SuspenStories_Vol_1_16?oldid=106858"
Community content is available under CC-BY-SA unless otherwise noted.