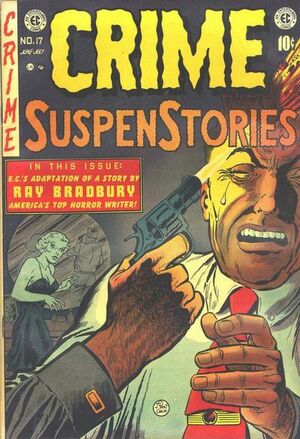 Appearing in "Touch and Go!"Edit

Synopsis for "Touch and Go!"Edit

1 of 4
Add photo
After a man commits a murder he loses his mind with obsessing over removing his fingerprints from every single object in the house of the victim.

Appearing in "One for the Money"Edit

Synopsis for "One for the Money"Edit

A golddigger meets up with a rich old woman who brings her lunatic son pretty women once every year that he can mutilate.

A ranch hand picks the wrong woman to seduce when he tries to dump her and she brands his face with the branding iron.

Appearing in "Two for the Show!"Edit

Synopsis for "Two for the Show!"Edit

A man kills his wife and stuffs the body in a trunk to take on the train with him. When he notices a suspicious detective tailing him, switches tags on the trunk with one identical to it. Then he offers to show the detective the contents of the trunk. Unfortunately for him, he's switched it with the trunk used by the woman in the second story to get rid of her son's victim.

Retrieved from "https://heykidscomics.fandom.com/wiki/Crime_SuspenStories_Vol_1_17?oldid=106859"
Community content is available under CC-BY-SA unless otherwise noted.