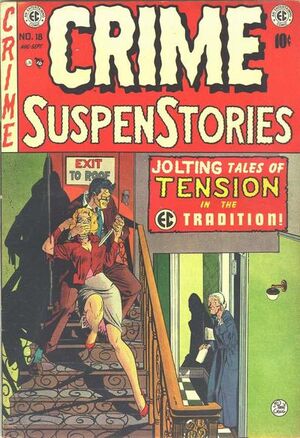 Appearing in "Fall Guy for Murder"Edit

Synopsis for "Fall Guy for Murder"Edit

1 of 4
Add photo
A man sets up a private investigator to kill his wife for him by asking him to investigate her disappearance. The man knows the P.I. will notice the clues that he has set down, so when he leaves a book detailing a similar plot he knows the P.I. will read it and assume that the man will attempt to kill him. The P.I. waits for the door of the apartment to open and fires off shots, killing the plotter's wife. The plotter trains a gun on him while picking up the phone to dial the police and thanks him for getting rid of his wife.

Appearing in "Juice for the Record!"Edit

Synopsis for "Juice for the Record!"Edit

When an electrician's no-good son is shot by one of his gangster associates after the boy shoots him and he dies the electrician plans to take the wrap for it and kill himself so that his boy has a second chance, but the son dies on the operating table so he thinks that he has made a confession onto a wax recording device for nothing. But the power failure which probably killed his son also spared him, because the cylinder that he gave to the police was blank without power to make the device function.

A man gets his girlfriend to marry a relative of a wealthy old lady so that when she dies they will inherit the money after disposing of the husband. The husband finds out about the scheme, however, so the murderer's time table is moved up. They knock him out and realize that now they'll have to kill him but the murderer knows he can't kill him without losing the money because that is how the will reads. He comes up with the idea of placing the body in the freezer for however long it takes the old woman to die and then thaw the body and pretend the man died recently. After four months the old woman finally passes away so they take the body out of the freezer and thaw it out, but their scheme is undone when the police conduct an autopsy.

Appearing in "From Here to Insanity"Edit

Synopsis for "From Here to Insanity"Edit

A killer forces his way into an apartment and coaches an old woman on what to say to the police in the hall. The super is with the cops and he knows the woman can read lips but is deaf so he asks her a question through the door. The killer tells her what to respond and the super tells the police the killer must be inside. The police burst in and capture the madman.

Retrieved from "https://heykidscomics.fandom.com/wiki/Crime_SuspenStories_Vol_1_18?oldid=106860"
Community content is available under CC-BY-SA unless otherwise noted.