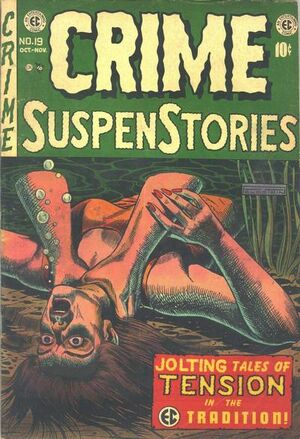 1 of 3
Add photo
A son doesn't want to follow in his father's footsteps, but he finds himself excluded from guilds, and so he does in order to marry. His work causes him to be away often. His wife asks him what he does for money but he refuses to tell her and so she eventually becomes unfaithful to him. She has an argument with a lover and stabs him and is condemned to be hanged. She is surprised to find out her husband's job. He is the hangman.

A woman plots to get rid of her husband whom she thinks is paralyzed by pulling his wheelchair into the lake by a thin wire that won't be noticed by the neighbors. It turns out that the husband was shaming his paralysis since the auto accident his wife caused because he suspected that she deliberately tried to kill him. Since his wife has a drink everytime before she goes swimming in the lake, he spikes it, and when she develops a cramp and drowns he laughs in her face while treading water.

Appearing in "Murder May Boomerang"Edit

Synopsis for "Murder May Boomerang"Edit

A man schemes to murder his wife and avoid the death penalty by claiming temporary insanity due to lycanthropy but he mistakenly chooses the evening to kill her upon with a moon eclipse.

Retrieved from "https://heykidscomics.fandom.com/wiki/Crime_SuspenStories_Vol_1_19?oldid=106861"
Community content is available under CC-BY-SA unless otherwise noted.