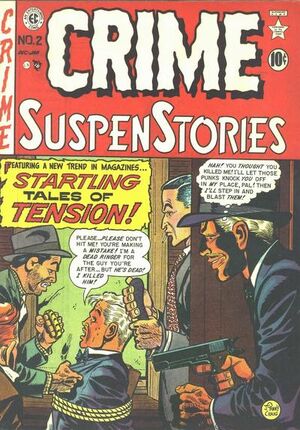 1 of 4
Add photo
A man murders a millionarie with amnesia in order to take his place because he looks just like him, but he finds out the man whose identity he's assumed wasn't a very nice person. He's kidnapped by a group of men who are the sons of a man who committed suicide after being swindled by the millionarie. He realizes if he fesses up he will face the chair, but if keeps quiet, they will kill him right now. He tells them his story, but they shoot him anyway.

Appearing in "A Moment of Madness!"Edit

Synopsis for "A Moment of Madness!"Edit

A brain surgeon suffers from blackouts in which he feels homicidal compulsions.

Appearing in "The Corpse in the Crematorium"Edit

Synopsis for "The Corpse in the Crematorium"Edit

A man who suffers from cataleptic fits is almost cremated until the attendant notices that he is sweating from the heat of the furnace.

Appearing in "Contract for Death"Edit

Synopsis for "Contract for Death"Edit

A doctor wishes to procure a fresh corpse for his work so he waits at a bridge until a potential suicide arrives. He offers the despondent man five thousand dollars in advance if he will surrender his body after one month. The man agrees and lives the high life until his time grows short. He visits the doc and tries to back out of the deal but the doc refuses. He says that the man must deliver a body one way or another. The man doesn't want to kill someone else to take his place, but he doesn't want to die either, so he waits in the dark with a lead pipe. The person he attacks is so savagely beaten that he is not able to be identified. There are witnesses, so the man flees to avoid being captured by the police. He returns to the bridge where he first met the doc as it is raising and tries to jump to the other side. He fails, and the next day's newspaper has headlines about the doctor being murdered last night and a suicide victim at the bridge.

Retrieved from "https://heykidscomics.fandom.com/wiki/Crime_SuspenStories_Vol_1_2?oldid=106844"
Community content is available under CC-BY-SA unless otherwise noted.