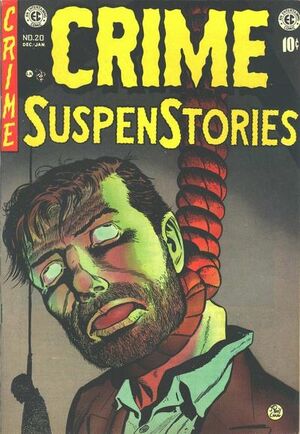 1 of 4
Add photo
A woman and her lover plot to murder her husband by locking him in a corral with a wild horse and then setting it ablaze just to be sure, but the husband overhears them. He waits until his wife leaves, then strangles her lover and buries him in the cellar. He goes down to the corral to kill his wife, but she gets the drop on him and shoves him in the corral with the wild horse. The fire she sets panics the horse and the husband is trampled to death. The stablehands put out the fire and the police ask the widow her whereabouts during the fire. When she says the cellar, they go down to investigate and see one of her scarfs poking out of the dirt. A tug pulls up the dead lover's head and the police arrest her for murder. She knows she can't defend herself without incriminating herself in her husband's killing.

A mobster allows two brothers one day before he drops them into the river with cement shoes to come up with the money he owes them. They resolve to murder their rich diabetic uncle, but they botch the attempt when one of them unknowingly gives the man a sucrose solution after the other gives him double-strength insulin and they cancel each other out. The mobster ends up dumping them into the river after all.

A man suspects his brother-in-law of plotting to murder his actress sister for her money, so when the brother-in-law brags about being able to tell his wife apart from other women blindfolded by just a kiss, he gets his sister to go along with a gag where they substitute a screen double in her bedroom when the husband unexpectedly phones to say that he'll be back that evening after he had announced plans to leave town. Several family friends burst out of the bathroom with a flash camera as the husband waves a bloody knife over the dead body of the unfortunate look alike.

When a woman's husband gets her lover killed by switching the prop of his stunt plane, she gets revenge by giving him a key for his handcuffed skydiving act that won't open the cuffs.

Retrieved from "https://heykidscomics.fandom.com/wiki/Crime_SuspenStories_Vol_1_20?oldid=106862"
Community content is available under CC-BY-SA unless otherwise noted.