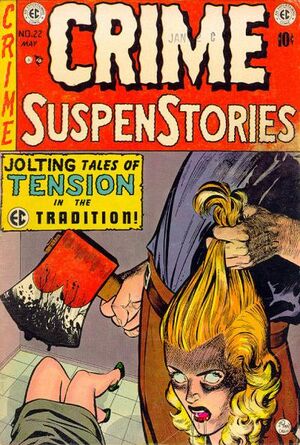 Appearing in "In Each and Every Package"Edit

Synopsis for "In Each and Every Package"Edit

1 of 4
Add photo
A man dismembers his wife and buries the pieces in his back yard. He and his lover, who has had plastic surgery in order to stand-in for his wife, get tickets to a quiz show called 'Treasure Hunt'. They are chosen as contestants and the host tells him that they're digging up his back yard in order to hide the prize money.

A bank clerk swindles a rich elderly lady out of fifty thousand dollars during his weekly visits for her grocery withdrawal since he knows that she will never miss it. His scheme unravels when she suddenly dies, however, and he knows an accounting of the estate will turn up the theft. He tries to flee town, but a knock at door reveals to him that a bank official and another man wait outside. The clerk resolves to throw himself out the window rather than go to prison. The police are puzzled that he killed himself after the old woman left him one hundred and twenty thousand dollars in her will.

A woman and her lover plot to kill off the husband by making it appear as though a fire broke out due to smoking in bed. Because the husband is older than the wife and jealous, he has a habit of locking her in her bedroom on the eleventh floor. The wife's lover thinks it won't be a problem because the firemen will rescue her. The fire burns for awhile but the firetruck doesn't arrive. The woman leaps from the window and the man tries to catch her but the impact kills them both. The reason the firetruck is late is because the man had not wanted to park his car outside the murder scene but parked it in front of the fire station, blocking the firetruck.

A man pretends to be blind so that he can get away with shooting his wife and pretend that it was an accident, but he trips himself up by filling out a crossword puzzle that a detective notices in the evening paper.

I'm surprised they ran this cover. In my opinion, this is EC's most objectionable cover. They were just asking for trouble with this one.

Retrieved from "https://heykidscomics.fandom.com/wiki/Crime_SuspenStories_Vol_1_22?oldid=106864"
Community content is available under CC-BY-SA unless otherwise noted.