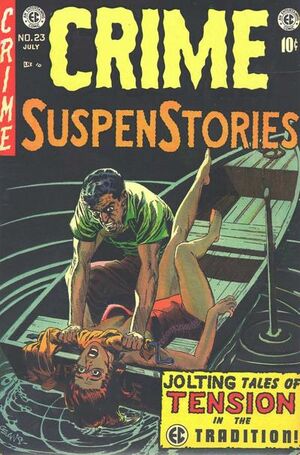 An April Fool's prank backfires on a bioweapons researcher when the victim of the prank takes it seriously and kills him.

A man murders his twin sister and her rich husband and attempts to pose as the woman to inherit the wealth. The estate lawyer phones the police when they go to a restaurant and the 'widow' enters the men's restroom.

A man sends a bomb to a rich old lady who has named him a beneficiary in her will, but she dies, so his girlfriend shows him the bomb package from the post office marked "deceased" just before it is timed to go off.

A man murders his wife and dumps her body in the lake of a town they are visiting, but he doesn't know that the town is a tourist attraction because of the crystal clear water.

Retrieved from "https://heykidscomics.fandom.com/wiki/Crime_SuspenStories_Vol_1_23?oldid=106865"
Community content is available under CC-BY-SA unless otherwise noted.