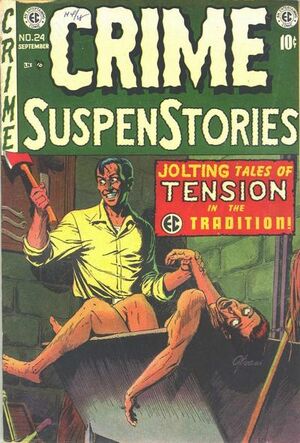 A man murders a millionarie who looks just like him in order to take his place, but what he doesn't know is that his victim has committed a murder witnessed by several people and the police arrest him for it.

A man shoots a woman's husband in Canada and he falls face first into the fireplace. Badly burned, the corpse is dragged out over the frozen river and pushed through a hole cut in the ice. The woman and her lover are married, but the killer can't get that charred face out of his mind. Every night he dreams of the corpse rising out of the hole in the ice and stumbling towards him. He turns to drink and is becoming a nervous wreck. A psychologist recommends that the two of them go on a cruise. The man feels better and the dreams have stopped, but the boat lurches suddenly. The two find themselves trapped in a small stateroom as an iceberg punctures the vessel. The last thing the two of them see coming towards them is the charred face of the man they murdered buried just beneath the surface of the ice.

A miner murders the paymaster in order to steal the payroll and then becomes stuck in a cave-in. The telephone says that they'll be able to reach him in a week so he needs to conserve his lunchbox, but he replaced his food and thermos with the money he stole.

Appearing in "More Blessed to Give"Edit

Synopsis for "More Blessed to Give"Edit

A husband plans to blow up his wife with a bomb placed in an anniversary cake and the wife plans to poison him with an anniversary bottle of wine. They each see other going about their preparations so they switch tactics. The wife puts a bomb in the wine bottle which kills the husband, but she eats pieces off the cake which the husband had poisoned.

Retrieved from "https://heykidscomics.fandom.com/wiki/Crime_SuspenStories_Vol_1_24?oldid=106866"
Community content is available under CC-BY-SA unless otherwise noted.