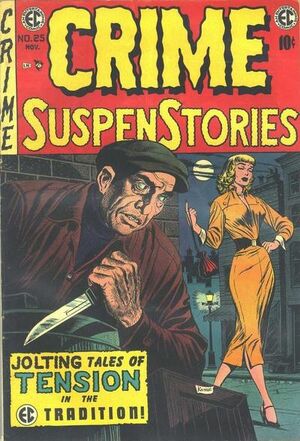 Appearing in "Three for the Money"Edit

Synopsis for "Three for the Money"Edit

1 of 3
Add photo
A woman tries to get two guys to kill her husband, but she gets tired of waiting, so by the time the two finally shoot and stab him, he's been dead for awhile since she poisoned him hours earlier.

1 of 7
Add photo
A prison convict feeds parts of his own body to the guard dogs in order to get to the sadistic overseer.

A man suffers a nervous breakdown after plotting a diamond heist and being unable to find the correct key to a locksmith's front door after making a key to the intending victim's lodging and then knocking several trays of keys onto the floor. What he doesn't know is that the locksmith's front door has a broken lock and he could have left at any time.

A couple of bent cops beat the crooks that they bring in until they sign confessions which they use to blackmail the robbers into committing hauls for them. One of the policemen is doing it so that he'll have money to send his boy to college. He gets a call from his partner who has just brought in a kid and asks if he should begin the routine. The cop says yes and gets a phone call from his panicked partner a bit later because he hit the kid too hard and killed him. The officer notices that his son is not home and when he arrives at the police station, he looks down at the dead body of his boy lying on the floor.

Retrieved from "https://heykidscomics.fandom.com/wiki/Crime_SuspenStories_Vol_1_25?oldid=106867"
Community content is available under CC-BY-SA unless otherwise noted.