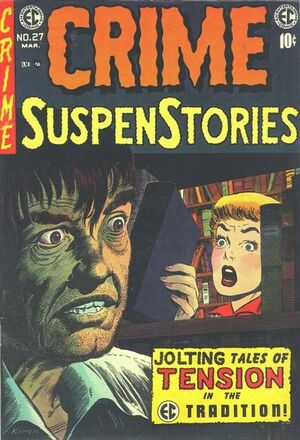 Appearing in "Maniac at Large"Edit

Synopsis for "Maniac at Large"Edit

1 of 4
Add photo
This story takes place from the perspective of a frightened librarian working after hours who has a premonition that the maniac at large is going to make her his eighth victim this evening. By the end of the story, the reader realizes that she is the maniac.

Appearing in "Just Her Speed"Edit

Synopsis for "Just Her Speed"Edit

A gunman threatens a man who works in a diner because he stole his girl from him. The clerk stalls for time, because he knows that a state trooper comes into the diner regularly at a certain time. He tells the gunman what he thinks are lies about what a tramp his wife is trying to make it sound like he regretted marrying her. When he finally sees the state trooper pull up, he rubs the gunman's face in what a saint his wife turned out to be since he thinks the gunman is about to be busted. Suddenly, a car speeds by and the trooper roars off after it. The enraged gunman smiles and empties his gun into the clerk. Further up the road, the state trooper has pulled over the car that has a man and the clerk's wife in it. She asks the officer not to inform her husband that she was out with another man since he thinks she's doing charity work and the officer replies "What you do in your personal life is your business ma'am. I didn't tell him about the others, did I?"

Appearing in "Where There's Smoke"Edit

Synopsis for "Where There's Smoke"Edit

A man plots to murder his wife by drugging her and starting a fire so that he can marry a younger woman who works for him. He abandons his plans as foolish when his employee quits so that she can marry her boyfriend, but what he didn't know is that his wife had the same idea.

A father refuses to believe that his rotten son is anything but a good boy so much that even when detectives are looking for him because he has murdered someone, the father hides him in a closet. When the detectives move towards the closet to check it, the father seizes the gun and pumps bullets into it to prove that his son is not in there. After the detectives leave, he tearfully removes his son's lifeless body from the closet and admonishes him to be good.

Retrieved from "https://heykidscomics.fandom.com/wiki/Crime_SuspenStories_Vol_1_27?oldid=106869"
Community content is available under CC-BY-SA unless otherwise noted.