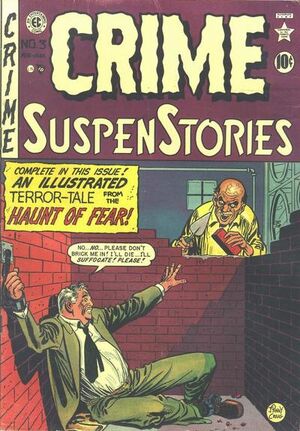 1 of 4
Add photo
A man poisons his wife and then is blackmailed by his maid. He knows he can't kill her because she has a letter in a deposit box to be opened only in the event of her death, so he decides to put poison in whiskey bottles and take just enough to make him ill and incriminate the maid in both his and his wife's poisoning. The poison makes him sick and he sends the maid for the doctor. He becomes delirious while she is gone and wonders why they are taking so long and so heads downstairs. He falls and breaks his leg. The maid and doctor return, and while he is semi-conscious, the doctors feeds him two full tumblers of his whiskey.

Appearing in "The Giggling Killer"Edit

Synopsis for "The Giggling Killer"Edit

When a serial killer is making the rounds of a particular town with a man resentful of his wife, the man gets the idea to copy the killer's motif to do away with his wife and throw suspicion off of himself. His plan works, but on driving back to his house he picks up a hitchhiker that turns out to be the serial killer.

Appearing in "Faced With Horror!"Edit

Synopsis for "Faced With Horror!"Edit

A bank robber demands that a plastic surgeon alter his appearance, but the doc figures he's as good as dead once he's finished, so he alters the man's face into something monstrous.

A wine maker takes a page from Edgar Allen Poe when he decides to get rid of a wine critic by walling him up in his wine cellar. Though drunk, the critic didn't trust his invitation and brought a gun with him. The wine maker dodges the shot, but after taking the time to entomb the critic he sees that his floor is covered with wine. He looks up into row upon row of large heavy vats and realizes the shot struck them. The vats collapse and the man is drown in his own wine.

Retrieved from "https://heykidscomics.fandom.com/wiki/Crime_SuspenStories_Vol_1_3?oldid=106845"
Community content is available under CC-BY-SA unless otherwise noted.