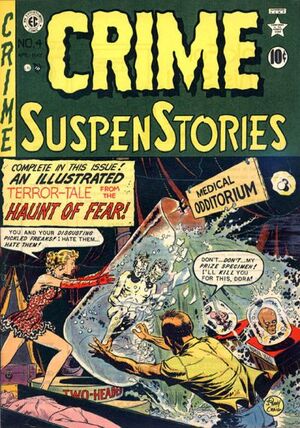 1 of 4
Add photo
A writer comes up with the solution of how to commit the perfect locked room murder, but the publishing houses won't read his story, so he begins to use his method himself. He is unhappy, however, as he considers himself a writer and not a killer. He sees in the paper that the last publisher he sent the story to has been murdered, but he didn't kill him. He realizes that someone at the publishing house read his story and is now using his method. He thinks this person is dangerous to him and that he better do something about it, but the other guy already had the same idea.

A woman takes out a life insurance policy on her husband and murders him with a fireplace poker. She puts the body in a car and sends it over a cliff and rolls down the side a bit to make it appear as though she had been thrown from the car. She gets away with it and collects on the policy. She meets another man that she falls in love with, but they have a car accident for real this time and the D.A. suspects foul play. He accuses her of murdering both men for their life insurance payouts and the jury finds her guilty.

An assistant editor plots to get rid of his boss by making another employee the fall guy. He sets up circumstantial evidence to make it appear as though his girl is cheating on him. After taking the girl over to the target's apartment, he gives his intended dupe a handgun and tells him to go over there right now to see them together. The schemer goes into the office he desires to possess early the next morning and helps himself to some of the presumably dead man's wine. The office door knob rattles and he figures the secretary has come in early so he'd better leave, but it turns out to be his intended fall guy. He asks him "Didn't you use the gun I gave you?" and the man says he came up with a different idea but he's changed his mind. Last night he came into the office and poisoned the wine.

A man who owns a carnival exhibit of pickled freaks learns that his lover has been cheating on him and she and her lover plan to kill him. When she returns to his tent, she flies into a rage and destroys his prize exhibit of a two-headed man so he cuts off both her and her lover's head to replace them with.

Retrieved from "https://heykidscomics.fandom.com/wiki/Crime_SuspenStories_Vol_1_4?oldid=106846"
Community content is available under CC-BY-SA unless otherwise noted.