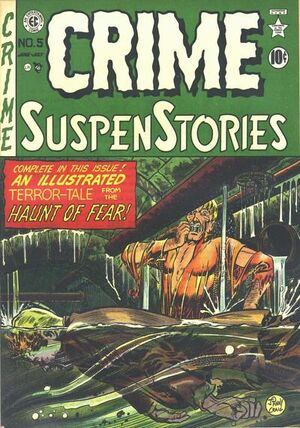 1 of 4
Add photo
When a man whom a woman is romantically involved with murders her husband and dumps his body into a manhole, she panics and goes to the police. He resolves to kill her before she can talk but they won't let him see her. When the police are waiting for him at his place, he assumes that the woman has talked and they are going to arrest him. He heads into the sewer to hide, but it is raining so hard that the water level continues to rise. Something bumps him in the dark and he strikes a match only to see the dead man's body plugging the outlet. He can't dislodge the corpse and the water rises over his head. The police had only wanted to warn him about the woman as she had escaped headquarters and threatened to kill him.

A D.A. has a convicted killer's execution canceled when he realizes that the man is delusional and has him committed to a state institution for the criminally insane instead.

Appearing in "The Gullible One"Edit

Synopsis for "The Gullible One"Edit

Five frat brothers get snowed in at a hunting lodge. One of the men is stabbed to death, but the police can't find enough evidence to incriminate any of the remaining four so they are released. The father of the slain boy invites them all to a memorial dinner which they attend. After the meal, the father claims to know who killed his son and has poisoned that person's food. He offers a glass which he claims is an antidote if the killer will simply reach out and take it. One of the men who is innocent is convinced that the father suspects him and has poisoned his food so he drinks down the glass. The father admits that he didn't know who killed his son and poisoned no one's food, but the glass he just offered contained poison. The fast-acting poison kills the innocent man leaving the guilty party unpunished.

A magician's assistant betrays him so that he drowns in a chest thrown into a lake instead of being able to escape from it. After a year has passed when he has become a famous magician by using all of the dead man's tricks, he returns to the shore of the lake to boast of his crime. The corpse of the dead magician rises from the lake and drags his former assistant back down into it.

Retrieved from "https://heykidscomics.fandom.com/wiki/Crime_SuspenStories_Vol_1_5?oldid=106847"
Community content is available under CC-BY-SA unless otherwise noted.