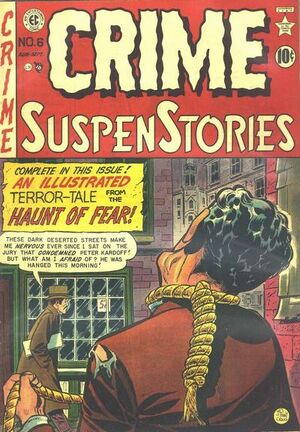 A woman poisons her vinter husband and buries his body by his special vine used to produce his best wine. She claims that she has been abandoned and after seven years wishes to marry her lover. The man drinks a glass made from the special wine and dies. She realizes that she used so much poison to kill her husband that the vine absorbed it and the police arrest her.

Appearing in "Out Of My Mind!"Edit

Synopsis for "Out Of My Mind!"Edit

A woman hatches a plot to murder her wealthy husband after his brother becomes head of the state hospital for the criminally insane. She figures she'll fake insanity and get the brother to testify at the trial so she'll be committed. After a few years she'll be released and have the dead man's money. What she doesn't realize is the brother saw through her the very night of the murder and only testified she was crazy in order to get her into his power so that he could sadistically torture her into insanity.

A man who hates his wife overhears his neighbor hiring a hitman to murder his wife, so he gets the idea of swapping the number plates on the doors so that his wife will be the one that gets murdered. He goes next door to be with the originally intended victim at the time of the killing, but what he doesn't know is that his wife has hired a hitman to bump him off.

A man is sentenced to be hung and pronounced dead, but though the rope broke his neck, he still lives. He hopes to murder the jury and get away with it on a legal technicality that he is pronounced dead, but the nine surviving jurors seize him and bury him alive claiming "They can't punish us for burying a dead man!"

Retrieved from "https://heykidscomics.fandom.com/wiki/Crime_SuspenStories_Vol_1_6?oldid=106848"
Community content is available under CC-BY-SA unless otherwise noted.