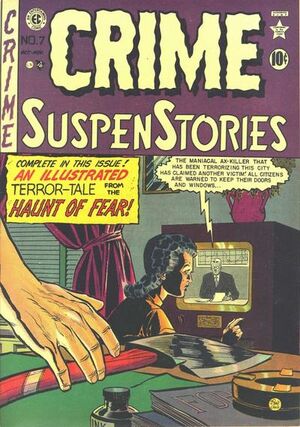 1 of 4
Add photo
After five hatchet killings in town a housewife works herself into such a froth that she stabs her large maid to death with a knife when the woman approaches her carrying an axe. Her husband arrives and tells her that the police have already apprehended the murderer.

A woman plots with her lover to kill her husband by fixing the car to spill out of the control. The husband survives, but is paralyzed. The lover's conscience begins to bother him and he takes to drink and blackmailing the woman. When she refuses to give him any more money he drunkenly tells the wheelchair bound husband that the wife tried to kill him. The drunk trips and strikes his head, killing himself. The wife tries to get her husband witness to absolve her, but he remains motionless and won't even blink in an attempt to communicate. The court convicts her of murdering her lover and as she is led away to be executed, she thinks that her husband probably can save her, but has chosen not to.

A crook puts an ad in the paper that a wealthy man will be out of town because he can't crack safes but he knows the ad will draw somebody. He pulls a gun on the safecracker and pretends to be the wealthy man. He makes him a bet of one thousand dollars and his freedom if he can get the safe open in three minutes. The safecracker wins the bet and leaves while the crook pockets the rest of the money. He ends up getting arrested anyway because the money from the safe turns out to be counterfeit.

Appearing in "Horror Under the Big-Top!"Edit

Synopsis for "Horror Under the Big-Top!"Edit

Retrieved from "https://heykidscomics.fandom.com/wiki/Crime_SuspenStories_Vol_1_7?oldid=106849"
Community content is available under CC-BY-SA unless otherwise noted.